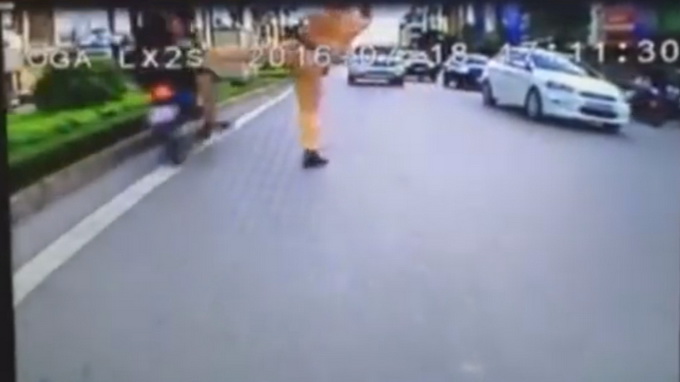 A traffic police officer in Hanoi has been temporarily removed from duty after he was filmed kicking two people off their motorbike when they were traveling the wrong way.

The two-minute clip has been circulated on YouTube and Facebook since Monday afternoon, with the Hanoi police department confirming its authenticity to Tuoi Tre (Youth) newspaper on Tuesday.

In the video, apparently filmed by a rear dash car camera, the police officer is seen rushing to the middle of the street to stop a motorbike that is speeding in the wrong direction.

The Hanoi police department said the officer in the video is a member of Team 3 under the municipal traffic police unit.

What needs to be verified is whether the officer hit the motorbike driver with his leg, or they just fell on their own, the department said.

The Team 3 leader Le Tu told Tuoi Tre on Tuesday that neither of the men on the motorbike was wearing the compulsory crash helmet at the time of the incident.

As they traveled the wrong way, the officer had to run out to stop them, only to see the two crash into the median strip, according to Tu’s account.

The team leader added that the two men on the motorbike were not injured after the crash.

“We have suspended the police officer and asked him to write a report about what happened,” Tu said. “He will be penalized if found guilty.”