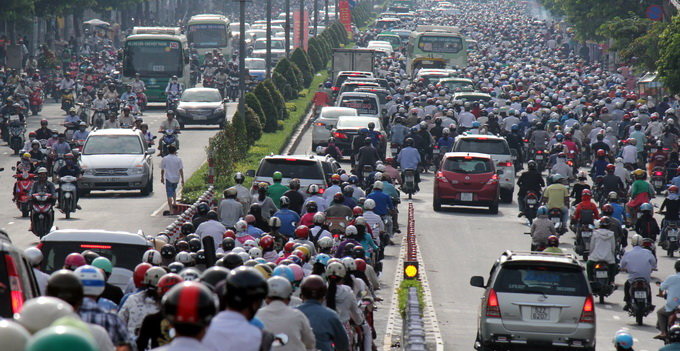 As traffic congestion worsens and short-term measures fall behind the increased rate of private car ownership in Ho Chi Minh City, the city’s administration is seeking capital for long-term infrastructure projects to combat the problem.

In 2013, a series of ‘instant’ overpasses, taking roughly six months each to finish, were erected at busy intersections in Ho Chi Minh City as an attempt to ease chronic congestions in the city.

While some of these overpasses were initially effective in reducing the load on city roads during rush hours, the remaining few such as those at Hoang Hoa Tham – Cong Hoa intersection, Lang Cha Ca roundabout and Hang Xanh intersection have failed to make an impact on the areas’ traffic volume.

Three years since their introduction, even the initially effective overpasses are starting to struggle with the increased volume of vehicles in the city as traffic congestion once again haunts commuters.

With the city administration’s plan to construct three more similarly built overpasses at other traffic hotspots, experts have begun to question the benefits for the city’s transport system in the long run.

Pham Sanh, an expert on bridge and road construction, said that the overpasses built in Ho Chi Minh City these past years were temporary measures resulting from an urgent call for solutions to ‘unbearable’ traffic congestion in the city at the time.

The expert stressed, however, that the construction and demolition of such temporary overpasses after a short time would only result in money wasted and prolonged congestion given the root of the problem would remain unresolved.

Sanh suggested that a comprehensive revision on the impact on traffic of overpasses be done before the construction of new ones be considered.

According to reports by city authorities, Ho Chi Minh City currently houses 13 million people, including residents and non-residents, while the city’s current planning is adapted for an estimated population of only ten million people by the year 2020.

The population surge has meant the number of private vehicles has also increased at a rapid rate, with 1,000 new motorbikes and 180 new cars registered each day, according to estimations by the municipal Department of Transport.

The number of motorbikes, including those registered in other locations, that use Ho Chi Minh City streets is estimated at over 8.5 million, while the figure for cars is 627,000, an increase of 500 percent compared to the year 2000.

The municipal Transport Department speculates that, with the current growth in cars on the road, the city will need to double its road surface by 2020 to be able to handle over one million cars moving around the city by that time.

City authorities have also been criticized for granting construction permits to too many high-rises and office buildings in downtown areas, which has led to an influx of traffic entering and exiting the city center during rush hours.

Vice Chairman of the Institute for Urban Studies and Infrastructure Development Nguyen Dang Son suggested that the city’s urban spatial planning be spread out in four directions to pull the traffic flow out of the city center, and a system of public transport be built to connect outskirt areas.

Short-term measures such as redirecting traffic flow and recruiting more traffic regulators are doing little to tackle the root of the problem, which is an underdeveloped transport infrastructure. The city administration is looking at projects on a larger scale to deal with the issue.

The construction of complex, multi-level traffic knots, elevated highways, and metro lines have already been planned in detail, but the missing factor for these ambitious projects is capital, and a lot of it.

According to estimations by the Ho Chi Minh City Finance and Investment State-Owned Company (HFIC), the city will need roughly VND1 quadrillion (US$44 billion) for infrastructure projects in the 2015-2030 period.

Director of the municipal Department of Transport Bui Xuan Cuong admitted that mobilizing such a large amount of capital in such a short time is too challenging a task, and thus large-scale projects can only be carried out over an extended period of time.

In an attempt to mobilize capital for its infrastructure projects, Ho Chi Minh City administrators last week submitted a request to the country’s Ministry of Finance for approval of the city’s plan to issue local government bonds this year.

The move, if approved, should mobilize VND3 trillion ($133.93 million) in capital for the city to go on with its projects to combat traffic congestion and flooding.

The bonds will have a face value of VND100,000 with three maturity periods of five, seven, and 15 years issued by HFIC through bidding, issuance underwriting, and issuing agents.

The first batch of bonds is expected to be available this October.