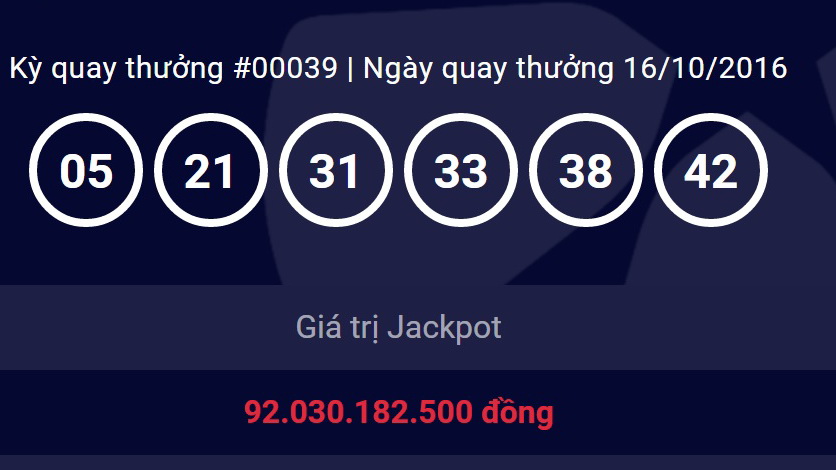 A farmer in the Mekong Delta province of Tra Vinh has become the first jackpot winner of the ‘Mega 6/45’ computerized lottery since it debuted in Vietnam in July.

The lottery’s 39th draw on Sunday evening produced the jackpot combination of 05-21-31-33-38-42 and found its first winner, according to an announcement by Vietlott, the company that runs the computerized lottery.

The jackpot winner was identified as a farmer from Tra Vinh Province who came to claim his prize at the company’s headquarters in Ho Chi Minh City the same evening.

According to the lucky man, he bought a Mega 6/45 lottery ticket on Sunday morning on his way back home.

The man discovered that he had hit the jackpot after watching the lottery draw on television with his family during dinner.

He will receive a sum of over VND83 billion ($3.71 million) after a 10 percent personal income tax deduction as regulated by Vietnam law, Vietlott says.

The computerized lottery ‘Mega 6/45’ was introduced in July as a result of cooperation between Vietnam’s state-run lottery company Vietlott and an indirect subsidiary of Malaysia-based firm Berjaya Corp Bhd (BCorp), which was granted an 18-year investment license to operate the computerized lottery in the country in January.

As the name suggests, buyers of the lottery may select a six-number combination, at the price of VND10,000 ($0.45) each, from a pool of whole numbers between 1 and 45.

The jackpot combination is randomly selected every Wednesday, Friday, and Sunday at 6:00 pm, and rolled over into the next lottery period should no winner emerge.

Apart from the jackpot, bonus prizes of up to VND10 million ($446) are awarded to those with three, four, or five numbers matching the jackpot combination.

The jackpot value has now been reset to the initial prize of VND12 billion.