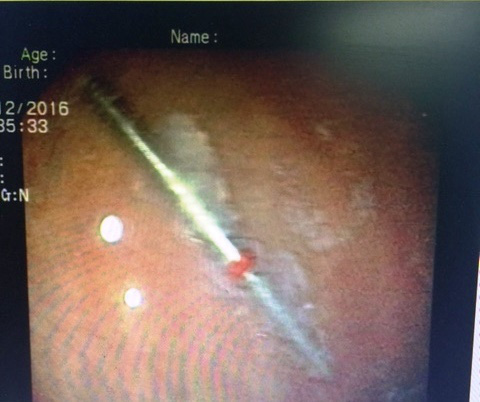 A woman from Ho Chi Minh City had to receive emergency treatment after a dentist dropped a dental tool down her throat on Thursday.

Doctors at the An Binh Hospital, located in District 5, on Thursday removed a three centimeter long pointed dental drill bit, from D.T.M.H., a 56-year-old resident in the southern Vietnamese city.

The procedure was performed by Dr. Nguyen Huu Tieng, who said H. had gone to a major dental center in District 5 at11:00 am that day to have her teeth fixed.

During the operation, H.’s dentist accidentally dropped a dental burr, a drill bit used to cut or shave teeth, down the patient’s throat.

The dental surgeon later advised H. against hospital admission, saying that the object would eventually be expelled from her body via her gastrointestinal tract.

After returning home, H. began to experience pain in her chest and later in her stomach before going to the An Binh Hospital for emergency help.

The initial diagnosis confirmed that the burr was stuck in her stomach, causing scratches and bleeding in the antrum.

Doctors at the infirmary chose to extract the object using an endoscopic technique.

H.’s pain subsided shortly after the procedure and she was able to be discharged from the hospital.