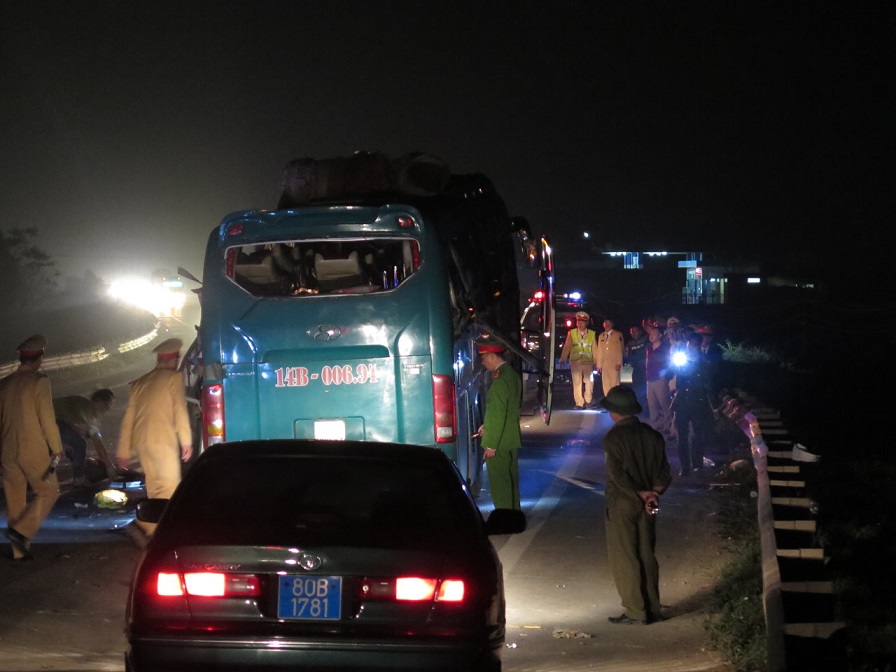 Vietnamese police have attributed the explosion of a sleeper bus on Tuesday night to explosives following a preliminary probe.

Initial investigation by the Department of Police in the northern province of Bac Ninh showed that the blast of the passenger bus was caused by explosive materials, not by fuel or electrical problems.

The coach was carrying passengers from Thai Nguyen to Quang Ninh, both in northern Vietnam, when that explosion occurred as it reached Que Vo District in Bac Ninh at around 11:00 pm.

Two people were killed in the accident, while officers reconfirmed that 14 people on the bus were injured instead of 12 in previous reports.

According to Colonel Nguyen Cong Nghiep, deputy director of the provincial police department, specialized units under the agency, in coordination with the Criminal Science Institute under the Ministry of Public Security, have probed the scene and relevant exhibits for evaluation.

Preliminary results showed that the explosion was caused by explosives, Col Nghiep stated, adding that officers are working to determine the origin of the materials in an urgent manner.

Nong Duc Thuong, 22, and Vu Duc Anh, 24, were among the few passengers who were not asleep prior to the accident. They noticed a burning smell coming from the rear of the bus before the explosion.

“There were about 40 people on the sleeper bus, most of whom were sleeping,” Duc recounted. “After a loud explosion, I was thrown to the front of the vehicle. I was disoriented and suffered burns on my arms and face.”

Nguyen Tu Quynh, chairman of the Bac Ninh People’s Committee, told Tuoi Tre (Youth) newspaper on Wednesday afternoon that the conditions of all the wounded people have been stable.

According to Duong Thi Dong, Trung’s 50-year-old mother, she was sitting near her son in the back of the bus.

Dong suffered burns and minor wounds across her body and face after being thrown for a few meters by the force of the blast.

The woman added that she and her son were heading to Quang Ninh for work.