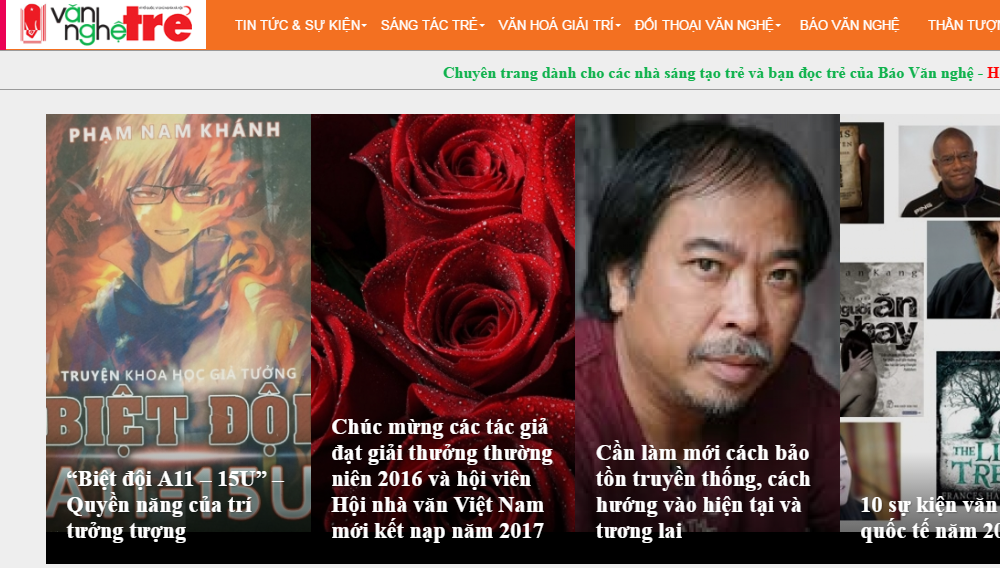 A leading Vietnamese literature weekly has been fined and asked to stop using an unlicensed domain for one of its websites, shortly after the site ran a controversial report about a state-owned car carrying a so-called fake license plate.

On Tuesday, vannghetre.net, run by Van Nghe (Literature and Art) weekly magazine, published an article alleging that the Toyota sedan used by Nguyen Xuan Anh, the Party chief of the central city of Da Nang, was wearing a bogus license plate.

Van Nghe is the media organ of the Hanoi-based Vietnam Literature Association, and Van Nghe Tre (Young Literature and Art) is introduced as an exclusive publication for its young readers.

The Da Nang Party chief has rebuffed the Van Nghe Tre report, saying it was meant to defame him.

While the accuracy of the controversial report remains to be verified, the Ministry of Information and Communications has discovered a separate violation from Van Nghe Tre, and decided to fine its umbrella publication Van Nghe on Wednesday.

According to the punitive decision by the ministry’s Authority of Press, Van Nghe has only been licensed to operate the Van Nghe Tre website via the ‘.com.vn’ domain, not the ‘.net’ one.

The weekly newspaper was therefore handed an administrative fine of VND30 million (US$1,339) and forced to stop using the unregistered dot-net domain.

A check by Tuoi Tre News on Thursday morning found that access to vannghetre.net will be automatically redirected to vannghetre.com.vn.

The controversial report about the license plate was also removed from the site.

Regarding the controversy around this article, the Authority of Press on Wednesday sent a directive to the Van Nghe editorial board, asking them to verify its accuracy and report to the authority by February 24.

If Van Nghe fails to show any proof to back their claim of the so-called fake license plate, the writer of the article and the weekly’s leaders will be held responsible before the law, the media watchdog underlined.

On Wednesday, Dao Tan Bang, chief of the secretariat with the Da Nang Party Committee, told reporters that the Van Nghe Tre report was completely fabricated.

Bang had submitted a petition calling on the information ministry to handle the case and penalize the writer for his groundless story, and insisted that Van Nghe rectify the information and apologize to the Da Nang Party chief.

Bang also showed the media all relevant papers to prove that the very car was properly registered and its license plate is totally real.

The official made no secret that the car was a gift from a local business to the Party Committee and was valued at VND1.18 billion ($52,679).

Bang said the vehicle’s value is well within the threshold set in the government’s Directive No.32 on the procurement of state-owned cars.

However, as reviewed by Tuoi Tre News, the Directive No.32 stipulates that the maximum value for cars in this category is only VD1.1 billion ($49,107).

Anh, the Party chief, also asserted to Tuoi Tre on Wednesday that “since my taking office [October 16, 2015], not a single penny from Da Nang’s budget has been spent on buying any car for me.”

“The car I am using is a gift from a business,” he confirmed.

Gifting costly cars to state entities does not seem to be an uncommon practice, at least in Da Nang.

The Da Nang Party Committee’s chief of the secretariat said the local administration is also using four state-owned cars, all of which are gifts from local enterprises.