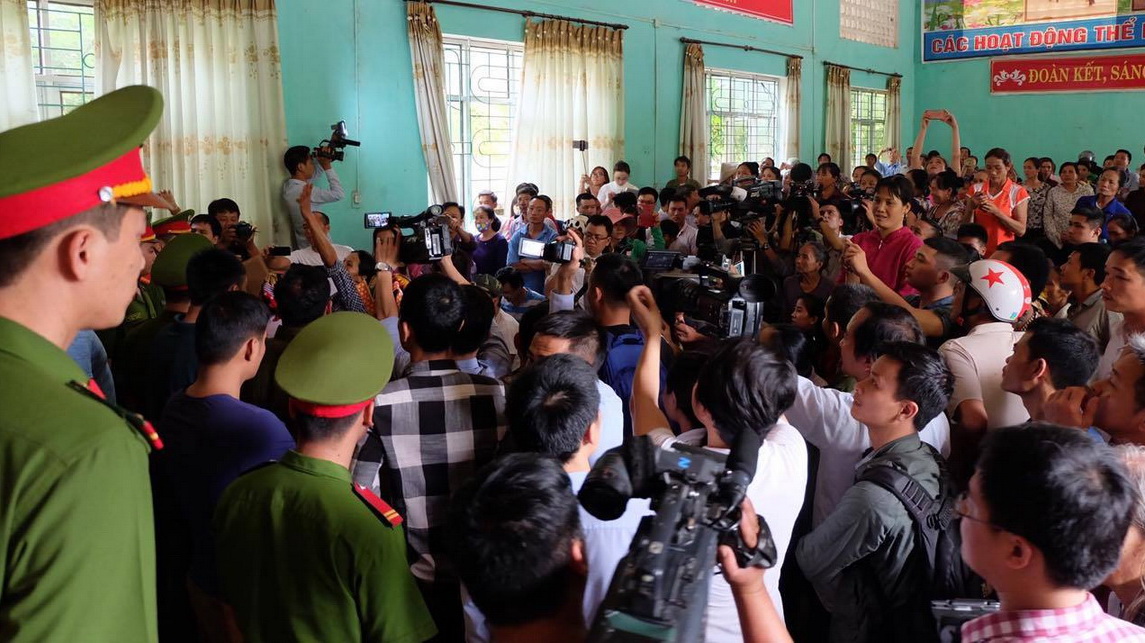 Chaos erupted in Hanoi on Tuesday at the public apology of a man who had been wrongfully convicted of child rape and murder, with the victim’s family staging a violent protest.

A ceremony was held by the People’s High Court of Hanoi to apologize to Han Duc Long, a man it had sentenced to death for the alleged rape and murder of a little girl.

Long served 11 years in jail during lengthy court trials and appeals that followed the controversial conviction, before finally being set free last December after courts ruled that the case against him lacked sufficient incriminating evidence.

Relatives, friends and former comrades of the 57-year-old veteran gathered at his house in the small village of Yen Ly in Phuc Son Commune, Tan Yen District in northern Vietnam’s Bac Giang Province early on Tuesday to celebrate the public apology set to happen on the afternoon of the same day.

At 1:30 pm, Long and his wife arrived at the headquarters of the People’s Committee of Phuc Son Commune to await the moment his name was cleared of the despicable crime.

Han Duc Long (R) and his wife Nguyen Thi Mai arrive at the headquarter of the People’s Committee of Phuc Son Commune in Bac Giang Province to attend the public apology for his wrongful conviction, April 25, 2017. Photo: Tuoi Tre

However, the venue was already packed with family members and relatives of N.T.Y., the girl for whose death Long had been wrongfully convicted, who were demanding that no public apology be held until the real culprit was found.

The ceremony continued despite the objections of the victim’s family members, who booed and shouted at the officials and judges throughout their remarks, at one point even rushing to the stage to rip down the backdrop.

The ceremony was cut short after five minutes when Tran Van Tuan, deputy chief justice of the Hanoi People’s High Court - who was being shielded by another official from objects thrown by protesters, was in the middle of reading out his apology.

Long was rushed from the hall without a chance to share his thoughts on the clearing of his name.

Long’s wife Nguyen Thi Mai said she could only hear “bits and pieces” of the apology because of all the noise from the protesters.

“We will wait and see whether the People’s Court of Hanoi thinks the apology they delivered today was sufficient,” Mai said. “About the compensation, I will work with our lawyer to set an amount soon.”

Deputy chief justice Tran Van Tuan told Tuoi Tre (Youth) newspaper after the event that the public apology on Tuesday, despite the chaos, had been conducted in line with current laws and therefore it would not be necessary to organize another.

The backdrop of the public apology is ripped down by angered members of the victim’s family, April 25, 2017. Photo: Tuoi Tre

On the evening of June 26, 2005, the body of five-year-old girl N.T.Y. was found in Phuc Son Commune with evidence of sexual assault.

After a four-month investigation, Bac Giang police suspended the search for the girl’s killer and encouraged locals to report any incident of sexual harassment in the area.

Two local women later accused Long of raping them and he was soon taken into custody for questioning.

During the police interrogations that followed, Long admitted to having raped and killed Yen.

Over lengthy court trials and appeals that lasted 11 years, Long was found guilty and sentenced to death four times, against which he unfailingly aired his grievances.

In 2014, the People’s Supreme Court of Vietnam found six contradictions in the case against Long and revoked his death sentence while ordering a re-trial.

As no further evidence against Long had been gathered since, the People’s Procuracy of Bac Giang decided to suspend the case and set the man free on December 20, 2016.