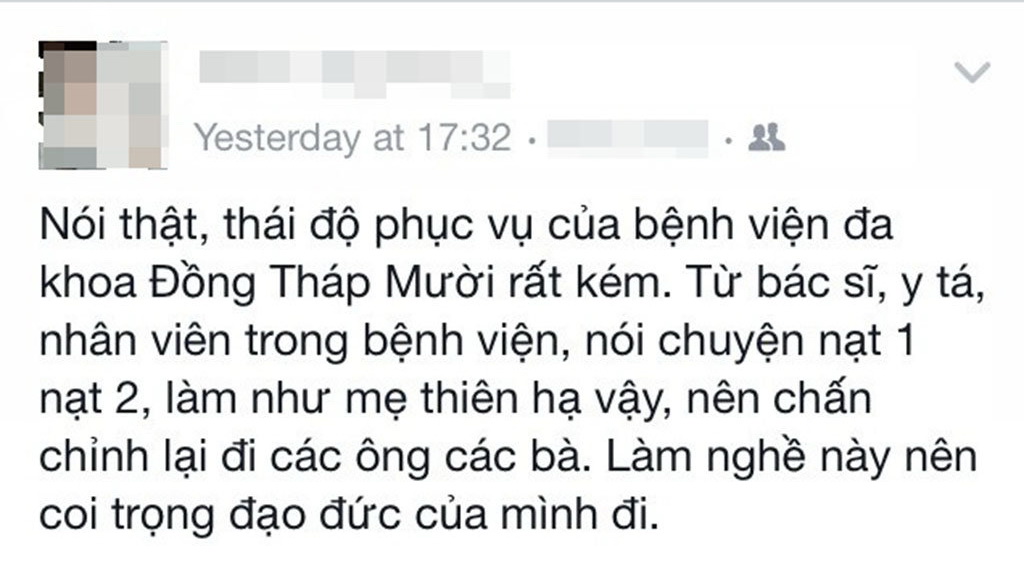 A female high school senior in southern Long An Province claims she’s been reprimanded and had her 'moral score' reduced for publicly denouncing a local hospital on Facebook.

P.T.T. received the punishment from Kien Tuong High School for ‘behavior that hurts the honor and reputation” of doctors and nurses at a local hospital where she had been treated after an accident.

According to T's account, she was taken to Dong Thap Muoi General Hospital in the province's Kien Tuong Town for treatment after an accident.

Dissatisfied with the patient service she received at the hospital, T. took to social media Facebook on March 5 to unleash her discontent.

“Frankly speaking, the attitude of [doctors and nurses at] Dong Thap Muoi General Hospital is very poor.” T. wrote on her Facebook status.

"Doctors, employees and nurses kept shouting [at patients] as if they were children. They could all do with a little attitude fixing. It’s part of their job description to be morally aware, isn’t it?”

The next day, T. was summoned to the headmaster’s office to explain the status and was later made to delete it from her Facebook profile.

On March 16, the school board announced official disciplinary action against T., including a stern reprimand and a reduction of her moral performance to ‘average’.

Besides the academic score at the end of a semester, schools in Vietnam also use a 'conduct/moral score' to evaluate student behavior.

The moral regulations introduced by the Minister of Education and Training require schools to evaluate student’s moral score based on their attitudes and behavior in the relations with teachers, school staff, family, friends and the society. Students are also evaluated by their learning effort and contribution to the activities of their classes, schools and the society.

The score is presented in four levels: good, quite good, average and bad, which in turn affect the student’s final results. For example, students with an ‘average’ moral score cannot receive a ‘good’ or ‘quite good’ final certificate even if their academic performance is excellent.

In addition, some colleges don’t accept students with “quite good” or lower level morality records.

According to the board of Kien Tuong High School, T’s actions ‘hurt the honor and reputations’ of doctors and nurses at Dong Thap Muoi Hospital.

“The decision to give T. an ‘average’ moral level was based on her past record of disobeying school regulations as well, not only because of her Facebook status.”