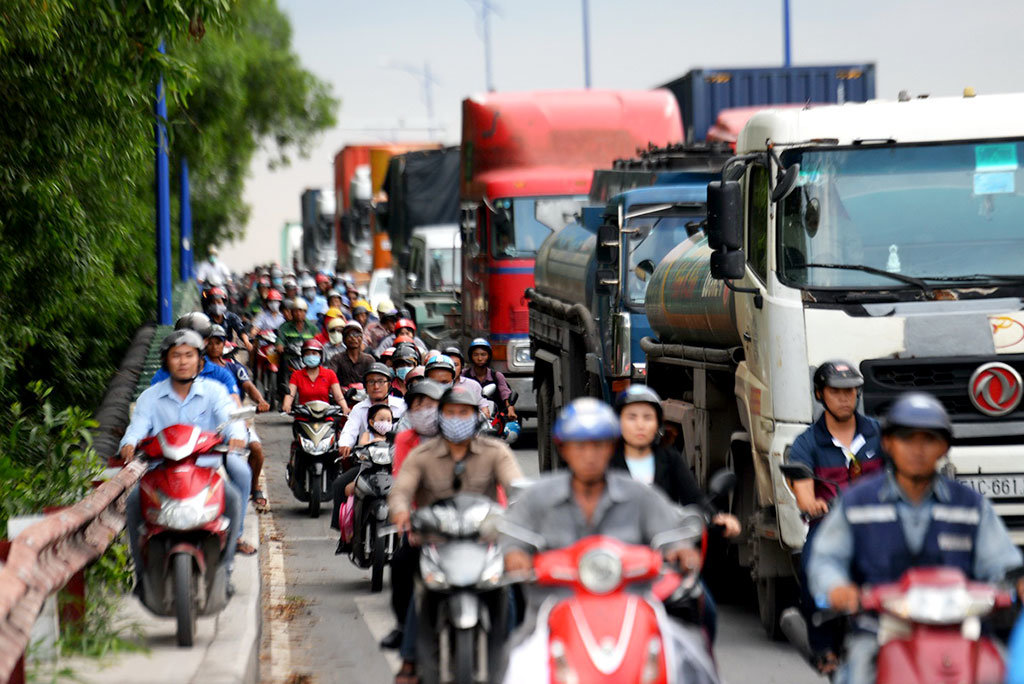 Ho Chi Minh City authorities are struggling to deal with severe congestion inside and outside a highly hectic port considered among the busiest in Vietnam.

Located in District 2, the bustling Cat Lai Port receives more than half the waterway freight in Vietnam, creating enormous pressure on its capacity as well as the traffic infrastructure in the surrounding area.

Congestion lasting hours can occur anytime during the day along Nguyen Thi Dinh, Vo Chi Cong, Dong Van Cong, and Mai Chi Tho Streets, which has become a nightmare for local residents, truck drivers, and businesses.

According to the observation of Tuoi Tre (Youth) newspaper reporters on Saturday morning, long lines of trucks were traveling at a snail’s pace on theses streets toward Cat Lai Port.

Traffic police had to direct the vehicles for a detour in order to relieve the gridlock.

On Vo Chi Cong Street, hundreds of tractor trailers could not move a single centimeter, while some of the drivers even left their trucks to buy some drinks.

According to Nguyen Cong Danh, a driver from Tan Binh District, traffic bottlenecks are common in the area day and night.

Congestion is most serious Wednesday to Friday, he said, adding that damaged roads also exacerbate the problem.

The most recent severe traffic jam was recorded on June 7 as it lingered for six hours, negatively impacting commuters and businesses.

According to Tran Quang Lam, deputy director of the municipal Department of Transport, several reasons can be attributed to the regular congestion.

Some trucks often stop at the sides of the roads to load and unload their goods instead of entering the port, obstructing other vehicles, Lam said, adding that many drivers do not follow traffic lights.

Roadworks at the intersection of Nguyen Thi Dinh with Vo Chi Cong Streets have taken up some space of the roads, while there are not enough personnel to regulate the traffic in the area, he continued.

Another official from the city’s transport department considered traffic jams an inevitability as around 20,000 trucks travel to and from the port on a daily basis.

Sluggish admission procedures at the entrance of the facility are also to blame for the snail-paced traffic, the official added.

Several measures to rectify the situation have been suggested during a recent meeting, said Deputy Director Lam.

Developers of roadworks in the area will be requested to expedite the construction as well as mobilize additional employees to control traffic flow during the execution of their projects.

Procedures at the entrance to Cat Lai Port will be simplified and streamlined, while managers of the facility should inform truck drivers of the specific times to pick up their shipments instead of having them come early and wait at the venue, creating further overloading.

The construction of a new street has been proposed to connect the port with Vo Chi Cong Street to ease pressure on Nguyen Thi Dinh and Dong Van Cong Streets.

The transport department will also expedite the implementation of road projects in nearby areas to help deal with the issue.

A total of 11 projects have been initiated and proposed to tackle the congestion, with the combined capital estimated at tens of trillions of dong (VND10 trillion = US$439.9 million).