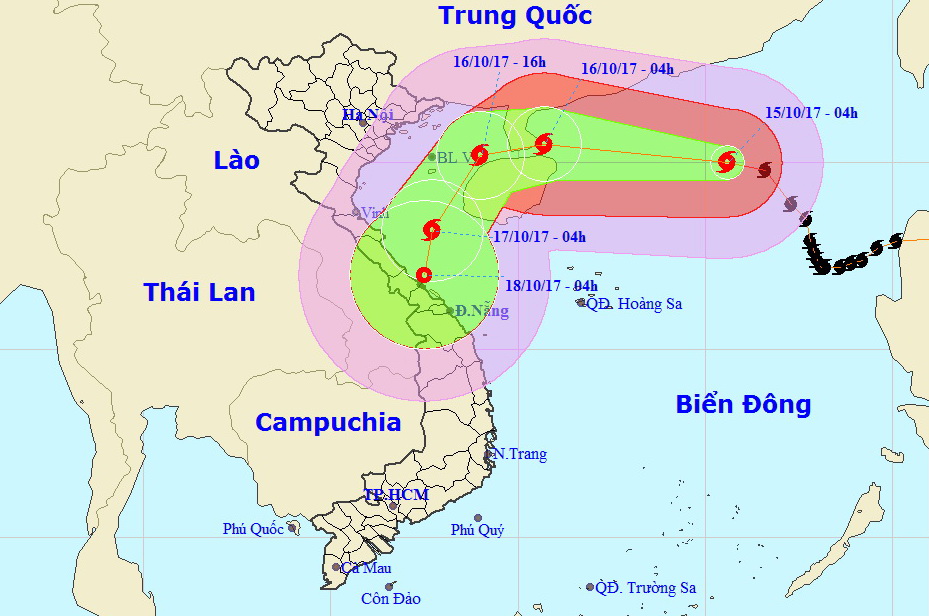 Tropical Storm Khanun has been forecast to enter the Gulf of Tonkin in the next couple of days, posing immense threats to north-central and northern Vietnamese localities.

The typhoon was located 520 kilometers east of China’s Hainan Island on Sunday morning, with average wind speed recorded between 115 and 135km per hour and squalls at 180km an hour, according to the National Center for Hydro-meteorological Forecasting (NCHMF).

In the next 24 hours, Khanun will travel northwestward at 20km an hour and is expected to reach the east of the Leizhou Peninsula on Monday morning.

It will change course the following day and travel southwestward at a velocity of 10 to 15km per hour and enter the Gulf of Tonkin at around 4:00 am on Tuesday, packing winds at 60 to 75km per hour.

Tran Quang Nam, head of the short-term forecast department under the NCHMF, stated that Khanun would be weakened by a cold front coming from the north after passing Hainan Island.

The cold spell will also cause the storm to change its direction, Nam added.

Under the influence of the typhoon, sea areas near the Gulf of Tonkin and along the coastline from north-central Quang Tri Province to central Quang Nam Province will have strong winds and high waves.

During a meeting on Saturday afternoon, Nguyen Xuan Cuong, Minister of Agriculture and Rural Development and head of the Central Steering Committee for Natural Disaster Prevention and Control, warned that Storm Khanun would be extremely dangerous as lakes and reservoirs in north-central and northern Vietnam had been fully loaded with water after recent rains and floods.

Cuong ordered competent agencies to coordinate and prepare for all scenarios.

The storm is forecast to cause downpours in northern Vietnam, which may result in serious consequences, he continued.

All efforts must be exerted and preventive measures must be taken, Cuong said, adding that weather forecasts should be updated every three hours.

Provinces and cities in the northern and north-central regions have been ravaged by floods since earlier this week.