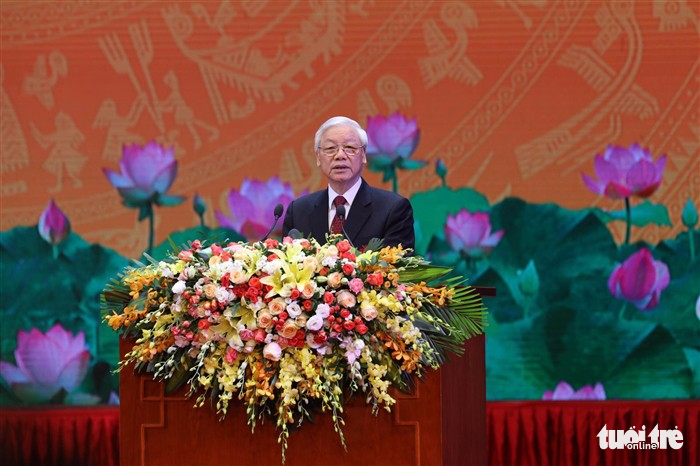 A ceremony took place in Hanoi on Sunday to mark the 100th anniversary of Russia’s October Revolution, which took place on November 7, 1917.

The event was held at the Vietnam National Convention Center and was attended by many of the country’s current and former leaders.

Speaking at the ceremony, General Secretary of the Communist Party of Vietnam Nguyen Phu Trong highlighted the significance of the revolution, saying it had opened up a new period in human history.

Victories of Vietnam’s own revolution have long been linked to the impact of the October Revolution, as well as to the support and assistance of the people of the former Soviet Union, General Secretary Trong elaborated.

Vietnam’s achievements during the last 30 years of reform can be put down to the application of Marxist-Leninist ideals and Ho Chi Minh thought, the Party chief stressed.

He then called for more effort in continuing to build a strong Party, improving economic growth, protecting national independence and sovereignty, expanding foreign relations, and taking care of people’s material and spiritual lives.

Nguyen Hong Vinh, deputy head of the Vietnam – Russia Friendship Association, extended his gratitude towards Russia on behalf of the Vietnamese community there.

The October Revolution began when Vladimir I. Lenin and the Bolshevik Party led an uprising of the former Soviet Union’s working class against the standing bourgeois government, ultimately resulting in the formation of the first socialist state in history.

The revolt inspired revolutionary movements around the world, including in Vietnam.