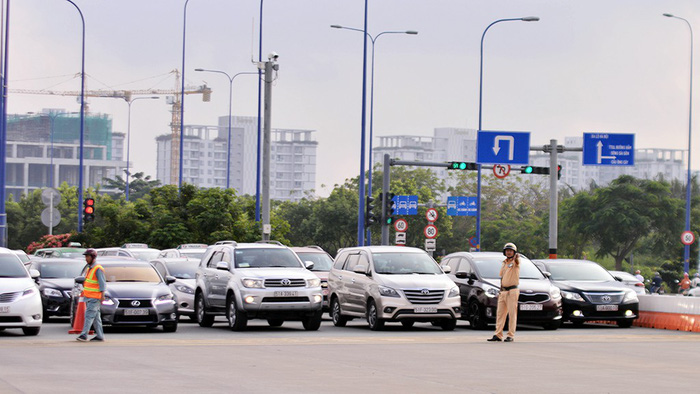 Constant traffic jams at the Saigon River tunnel in Ho Chi Minh City have prompted local authorities to expedite the construction of new bridges as a permanent solution to the problem.

The entrance to the Thu Thiem Tunnel under the Saigon River in District 2 was in total gridlock during Thursday morning’s rush hour, mainly due to the enormous amount of motorbikes.

Thousands of motorcycles inched through the tunnel at a snail’s pace while the tunnel’s automobile lanes remained empty.

For the second day in a row, traffic police officers were forced to temporarily prohibit cars from entering the tunnel in order to allow more space for motorcyclists and alleviate the situation.

According to local resident Nguyen Vu Linh, traffic jams at both entrances of Thu Thiem Tunnel have become a frequent occurrence due to the massive amounts of commuters using the tunnel to travel between District 2 and District 1 in the morning and vice-versa in the evening.

Without traffic the tunnel takes about five minutes to cross, Linh stated, adding that during peak hours that number mushrooms to 15 minutes.

The Management Center of Saigon River Tunnel and local traffic police units have been using multiple methods to aid the congestion, including brief car bans and adjusting traffic light timers at nearby intersections.

The Center is expected to propose additional automobile ban on specific routes during rush hours in the morning and evening.

However, any measures enacted are expected to be temporary while a more permanent solution of building new bridges and creating additional routes between Districts 1 and 2 is mulled by authorities.

The construction of the Thu Thiem 2 Bridge linking the two districts was initiated in February 2015 with a capital investment of VND4.26 trillion (US$187.6 million).

It is originally expected to be completed in 2018.

However, Nguyen Xuan Nguyen, an official from the municipal Department of Transport, stated that the completion date has been pushed to 2019, attributing the delay to a slow area clearance process.

It remains unknown when the construction of the two bridges will be initiated, Nguyen elaborated.

The Saigon River separates District 2 from most of the city’s other districts.

People from District 2 are currently able to travel to District 1 via the Thu Thiem Tunnel, to Binh Thanh District via the Saigon Bridge and Thu Thiem Bridge, and to District 7 via the Phu My Bridge.