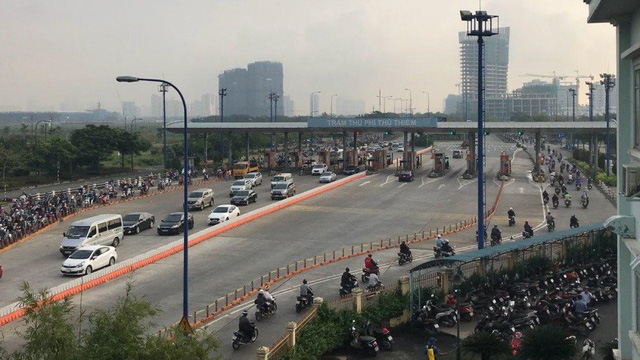 ​Cars temporarily banned from Saigon River tunnel due to congestion

Congestion at both entrances of the Thu Thiem Tunnel was caused by the growing number of vehicles dependent on the tunnel for their daily commute.

The Management Center of Saigon River Tunnel and local traffic police units limited use of the tunnel to two-wheel vehicles in order to solve the issue.

Similar measures are expected to be applied should the situation recur.

Specialized units will be posted around the clock at tollgates on both ends of the tunnel to control traffic if necessary, Le Minh Triet, director of the tunnel’s management center, said.

Traffic police officers will allow motorcyclists to travel in additional lanes if necessary in order to mitigate traffic buildup.

Gridlock mainly occurs at the Thu Thiem Tunnel during morning rush hours when large numbers of motorcycle riders use the tunnel for their daily commute, the director continued.

Traffic volume at the tunnel between September and November was recorded at 270,000 motorbikes per day, a year-on-year increase of 40,000.

The tunnel management center plans to ask the municipal Department of Transport to prohibit cars exiting the tunnel onto Vo Van Kiet Avenue from entering the mixed traffic lane between 6:00 am and 9:00 am, and 4:00 pm and 7:00 pm.

Between 5:00 pm and 7:00 pm, access to the tunnel from the Calmette Bridge off-ramp will be blocked to automobiles.