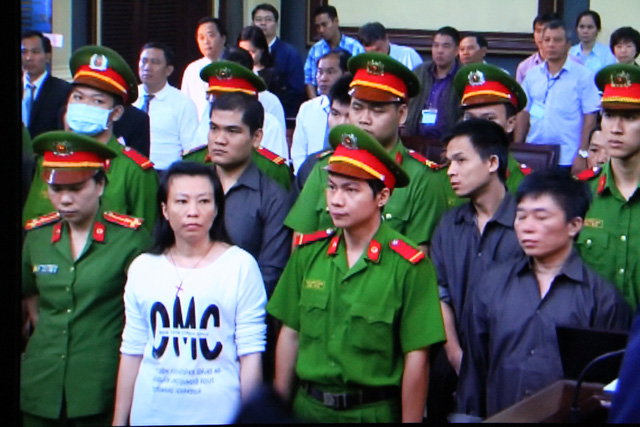 A local woman appeared in the same court on charges of “failing to denounce crimes.”

They were behind terrorism attempts to explode the Tan Son Nhat airport, setting fire on a parking lot housing impounded vehicles of a police station in southern Vietnam in April this year, and many other failed attempts.

The court will run until Friday this week.

According to court documents, on February 16, 1991, a group of Vietnamese subversives in California, known as a ‘counter-revolutionary’ force led by Dao Minh Quan, founded the so-called “Temporary Vietnam Government.”

This group, through such means of media as websites, emails and blogs, called for stripping the Communist Party of Vietnam of its leadership role and overthrowing the Vietnamese government through violence and riots.

This counter-revolutionary organization then founded many other smaller sects to expand its forces and participated in terrorist acts in Vietnam, disseminating anti-government and anti-Party information in an attempt to topple the Vietnamese people’s government.

By 2007, the Vietnamese Ministry of Public Security had successfully neutralized all activities by this organization and weakened its forces.

From the end of 2013, Quan and some accomplices living overseas have tried to restart his organization.

In late 2016, Quan incited Pham Anh Dao, aka Pham Lisa, and some other individuals through social media to form an armed group with the main objectives of participating in terrorism, assassinating Vietnamese officials, and sabotaging important targets and constructions in Vietnam.

This armed group focused on making petrol and smoke bombs for use in protests and attacks on local police stations. They also purchased different weapons to prepare for the assassination of Vietnamese officials and Party members.

In late March 2017, as instructed by Pham Lisa, Nguyen Duc Sinh returned to Vietnam from Laos and gathered his men to plot an act of terrorism to ‘gain fame’ for the organization and sabotage Vietnam.

During his time in Vietnam, Sing lived with Han Thai Phong at the house of Nguyen Duc Toan in the south-central province of Binh Thuan.

These individuals then met Vu Mong Phong and informed him of their plan to cause an explosion at the parking lot housing impounded vehicles of the police station of Bien Hoa, the capital of Dong Nai Province.

As he was offered a cash award of VND500 million (US$22,026), Phong agreed to join the plot as an ‘alarmer’ – mounting guard while his accessories carried out the attack.

At 2:30 pm on April 7, Sinh and Dang Hoang Thien successfully created two sets of ‘gas bombs,’ while Thai Phong and Nguyen Ngoc Tien made one set. Sinh then mapped the warehouse of the Bien Hoa police station and assigned specific roles to each of the others.

At around 2:00 pm the following day, Thien, Sinh and Thai Phong approached the warehouse, while Mong Phong and Hoang Van Duong kept guard. Thien and Sinh managed to throw their bombs into the facility.

The warehouse security guards soon discovered the facility was on fire and called for help. However, the entire warehouse and 320 motorbikes were completely destroyed in the inferno, causing total damage of VND1.3 billion ($57,269).

Following the terror attack, all of the plotters returned to Mong Phong’s house in Binh Thuan for hiding.

Thien told his girlfriend, Le Thi Thu Phuong, of his participation in the plot via a text message, to which the woman showed objection, saying he should not have done so.

Phuong appeared in court for knowing of Thien’s act but never reported it to police officers.

It turned out that Thien did not listen to his girlfriend’s advice.

After the attack on the Bien Hoa police station, Pham Lisa continued to instruct Thien to make more petrol bombs to prepare for an attack at Tan Son Nhat. Lisa transferred more than VND8 million ($352) to the account of Phuong, while Nguyen Thi Chung gave him an additional VND3.5 million ($154).

At a house in District 6, Ho Chi Minh City, Thien created two petrol bombs that could be detonated remotely.

At 5:00 pm on April 22 this year, Truong Tan Phat picked up Ngo Thuy Tuong Vy and both headed to Tan Son Nhat.

At round 6:00 pm the same day, Thien arrived with his bombs stored in two cardboard boxes, one of which was handed to Vy.

Upon entering the airport’s parking lot, Phat removed the battery out of the bomb, apparently after thinking twice about the plot.

Phat and Vy dropped the cardboard box with the bomb at Column 9 of the departure hall of the international terminal.

Phat then called Thien to inform that the bomb would not detonate due to a petrol leak, meaning he and Vy would return to the parking lot. One passenger saw the bomb and notified authorities.

For his part, Thien himself brought the remaining bomb to the third floor of the parking lot and returned to the ground to remotely detonate it.

However, the plan failed as Thien was standing too far from the bomb. He then returned to take the explosive device back, and after realizing that it still worked, Thien decided to drop it at Column 9 of the departure hall of the international terminal.

At 7:52 pm the same day, Vy managed to detonate the bomb, causing a fire that sent passengers into panic. The fire was eventually put out by competent agencies.

After the explosion, Thien and his accomplices all came back to the house in District 6, where Phuong continued to voice opposition to her boyfriend’s terror act.

On top of these two major attacks, these individuals also implemented other acts of terrorism but all of them were stopped just in time by authorities.

In late 2016, Sinh and his accomplices started plotting attacks on the occasions of the Lunar New Year, falling late January 2017, and Reunification Day (April 30).

Sinh and Le Hung Cuong then left for Cambodia and managed to buy a K59 gun and nine bullets.

In January 2017, Sinh was involved in a public scuffle in Hoc Mon District, outside Ho Chi Minh City, and was arrested carrying his gun. He managed to escape and run away to Laos.

In March 2017, as requested by Pham Lisa, Sinh returned to Vietnam but was nabbed before carrying out any of his terrorism plots.

Similarly, Bui Tan Thanh and Hung Van Vuong and some other individuals managed to create a petrol bomb and dropped it in front of a café near the Big C supermarket on Truong Chinh Street, Tan Phu District, but police blocked the attack.

Thanh and Vuong also held an illegal protest at the Notre-Dame Cathedral Basilica of Saigon.

Pham Lisa once instructed Tran Quoc Luong to create a pen gun for use in terror acts. In March, Luong was selling two such firearms to a man in the northern province of Quang Ninh when he was apprehended.

Other individuals in the case, Doan Van The, Tran Van No and Le Thanh Hai, were charged for partaking in different terrorist groups and formulating plans to attack the Lee&Man paper mill in the Mekong Delta province of Hau Giang, Tan Son Nhat Airport, the Big C chain and the house of a ward chairman in District 12, Ho Chi Minh City.