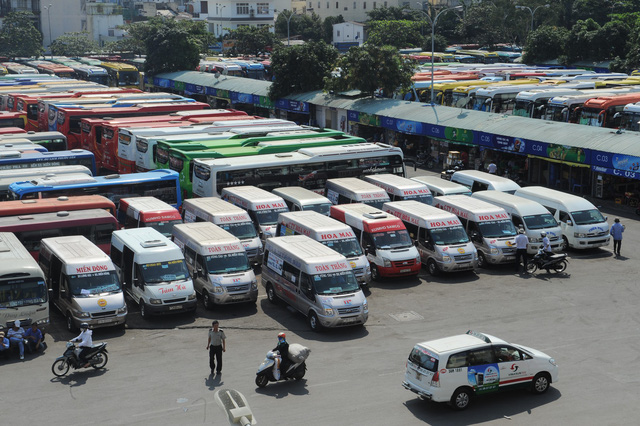 The new Mien Dong (Eastern) Bus Station in Ho Chi Minh City will not be opening before the Lunar New Year as planned due to slow construction and site clearance delays.

The municipal Department of Transport has submitted a report to the People’s Committee regarding the construction of the new facility, located in District 9.

The current Mien Dong station is situated in Binh Thanh District, an area of the city which has become increasingly prone to congestion over the past few years.

According to the report, construction delays are forcing the grand opening of the station to be pushed back until sometime after the upcoming Lunar New Year, which falls on February 16, in accordance with previous requests from the city’s administration.

A major factor contributing to the delay is the refusal of two local households to relocate from the construction site, forcing contractors to put a pause on clearing the area.

Meanwhile, some local residents use roads within the project site for their daily commute due to roadblocks elsewhere along their route caused by the construction of metro line No. 1, connecting District 1 and District 9.

The Saigon Transportation Mechanical Corporation (SAMCO), the project’s developer, has attempted to mitigate these issues by building roads within the bus station, as well as maintaining temporary routes for local citizens, sacrificing much needed time in the process.

For their part, the transport department is urging SAMCO to officially report all issues it is facing with the implementation of the project to the municipal People’s Committee so that assistance can be provided wherever possible.

The District 9 administration has also been asked to quickly relocate the remaining households situated on the project site.

Construction on the new VND4 trillion (US$176.4 million) bus station began on April  26 in a 16-hectare area, 12.3 of which is situated on the outskirts of District 9 while the remaining 3.7 stretches into nearby Binh Duong Province.

The developer is currently installing the drainage and power systems, building roads, and completing communication and lighting systems.