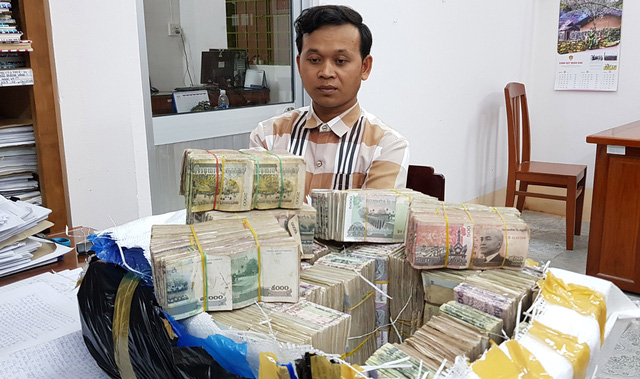 A Cambodian has been nabbed for allegedly smuggling paddies from his homeland into Vietnam after already amassing a large amount of money.

Vietnamese authorities have confirmed HouNat, 32, who is from the Cambodian province of Kampot, had been arrested by officials in Ha Tien Town, located in the southern Vietnamese city of Kien Giang, for attempting to carry KHR176 million (US$43,824) out of Vietnam, without providing the specific date of the arrest.

The man was captured as he was about to return to his home country via the Ha Tien Border Gate, Colonel Luu Thanh Tin, deputy director of the Kien Giang Department of Police, affirmed on Sunday.

HouNat stated he had earned the money by selling paddies harvested in Cambodia to people in Vietnam within last year. He had failed to inform officials of this sale, authorities said.

Vietnamese police decided to arrest the Cambodian national for transporting currency and products across the border without declaring them to competent agencies, which is against Article 189 under Vietnam’s Penal Code.

According to officers, the import of paddies from Cambodia into Vietnam has become quite common over the past years.

The paddies are then turned into rice and sold at high prices at markets in Ha Tien.

Cambodian rice is preferred by many Vietnamese who believe that the rice is clean and tasty.

Vietnamese merchants were previously in charge of collecting the paddies in Cambodia before distributing them to the Vietnamese market.

However, many Cambodian traders such as HouNat have recently taken over from them.