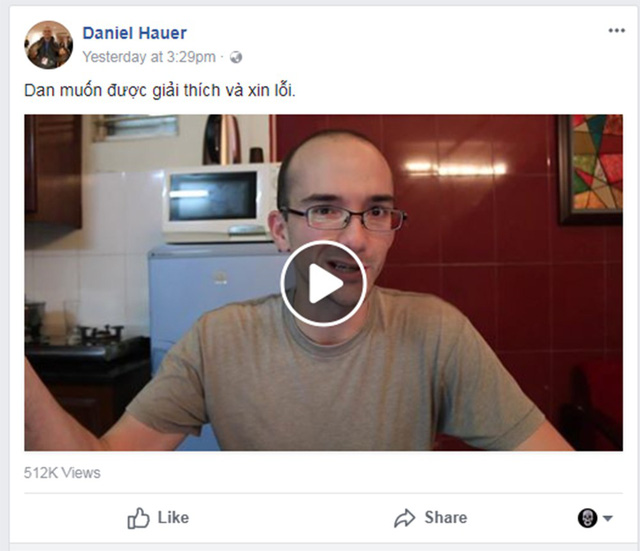 Vietnam’s online information watchdog has summoned Daniel Hauer, a U.S. citizen residing in Hanoi, over his offensive remarks on Facebook about a late Vietnamese war hero.

The summons was issued on Friday by the Authority of Broadcasting and Electronic Information (ABEI) under the Ministry of Information and Communications.

The U.S. man is asked to present himself at ABEI’s headquarters in Hanoi on the morning of January 30, where he is expected to make a statement about his comment on Facebook that had “violated laws” on posting information online, according to the summons.

Hauer gave the comment under a post in a Facebook group of expats in Hanoi, where another member said he would get a tattoo of the Vietnam flag on his chest if his post got over 1,000 likes and Vietnam’s football team defeated Uzbekistan at this Saturday’s final game of the 2018 AFC U23 Championship in China.

Hauer’s comment made innuendos about genital piercing that many found to be offensive toward General Vo Nguyen Giap, a late and well-respected Vietnamese war hero whose death in 2013 was followed by days of national mourning.

The remark was captured and shared across the social media platform and other local news sites, igniting a wave of heated criticism.

On Thursday, Hauer posted a video on his Facebook profile in which the man made an apology for what he described as nothing more than a distasteful joke that was not meant to be taken as an insult towards the late general or the Vietnamese people.

However, many people quickly pointed out the hypocrisy in Hauer’s apology, as the man had been found to have posted in another group describing his critics as 'crazy nationalists.'

“Well, folks, if I do end up murdered in the street, at least I’ll be a martyr for sarcastic jokes and not being a crazy nationalist,” Hauer wrote.

English centers in Hanoi where Hauer worked as a teacher have announced that they had cut ties with the man over his offensive and disrespectful comments.

Vietnam’s Ministry of Foreign Affairs on Friday dismissed rumors spread by a fake news site that the U.S. man had been deported due to his offensive remarks.

Hauer, who runs a YouTube channel where he makes vlogs talking about his experience in Vietnam as well as offering English lessons, is well-known among local youths for his fluent Vietnamese.

His channel, ‘Dan Hauer,' has been subscribed by over one million users as of January 2018.