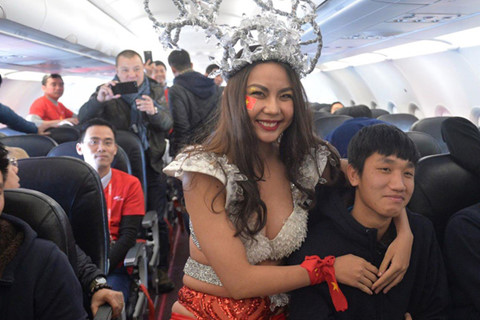 Vietnamese Minister of Culture, Sports and Tourism Nguyen Ngoc Thien has requested an inspection of the bikini performance on a Vietjet plane carrying the national U23 football team back home after completing their campaign at the 2018 AFC U23 Championship in China.

In his dispatch issued on Monday, Minister Thien asked ministerial inspectors to work with relevant authorities in investigating the incident and suggesting an appropriate penalty for the budget airline.

A full report on the matter is expected to be submitted to the minister by January 31.

Vietjet has been in hot water since Sunday, when clips began to circulate across social media platforms showing bikini-clad dancers strutting and performing suggestive moves on the airline’s Shanghai-Hanoi flight carrying the U23 players.

The dancers even approached the players for photos, causing a moment of awkwardness as the young men were visibly uncomfortable with the unexpected intimacy.

The footage drew a storm of criticism online directed at the budget carrier for allowing such a “ridiculous” and “grotesque” performance to have taken place on a trip that was meant to be a celebration of national pride.

Vietjet CEO and President Nguyen Thi Phuong Thao published an official apology on Facebook for the scandal on the same day, though putting the blame on the dancers for having “acted out of spontaneity.”

“The performance was not a part of Vietjet’s plan, but an improvised action taken by the logistical organizer of the trip,” Thao explained.

“A dancer acted on her own initiation to approach the players asking for autographs and photos, a video of which was later uploaded on social media and caused displeasure among the public,” she added.

According to Thao, Vietjet executives have taken disciplinary actions against employees involved in the incident, as well as drawn a lesson from the scandal.

The CEO sent her sincere apologies to the U23 players, sports officials, fans and the Vietnamese people.

However, not many bought Thao’s explanation for the bikini performance, as it was unlikely that the dancers had been able to board the plane and perform in such revealing costumes without being interrupted by airline employees, unless their gig had been on the airline’s plan.

In related news, Vietnam’s flag carrier Vietnam Airlines has revealed that it had been poised to sponsor the players’ flight back home after the AFC tournament, before a last-minute decision was made to let Vietjet take over the honor.

The decision was made by the General Department of Sports and Physical Training following a proposal from the Vietnam Football Federation, according to Vietnam Airlines.

The last-minute cancellation left the state-owned airline struggling to find enough passengers to fill in the 44 vacant seats on the flight, it said.

A Vietjet representative has denied any knowledge of the cancellation of bookings with Vietnam Airlines by sports authorities.

Vietnam U23s are currently in the spotlight following their success at the 2018 AFC U23 Championship, where they won silver medals after a snowy 1-2 defeat against Uzbekistan U23s in the finale on Saturday.

Low-cost Vietnamese carrier Vietjet is known for its bikini-clad models posing as flight attendants in promotional videos and calendars.

The bikini uniforms have been a considerable contributor to the carrier’s success, with its CEO Nguyen Thi Phuong Thao becoming Vietnam’s first female billionaire.