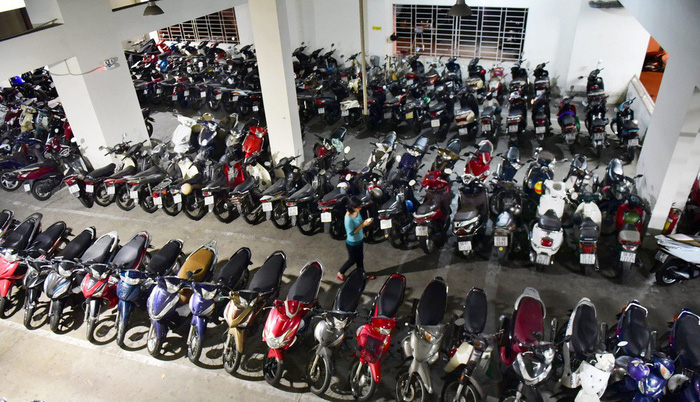 During a conference held by the municipal People’s Committee on Wednesday, HoREA suggested that parking facilities be built separately at all new apartment buildings.

The proposal was made in the wake of a deadly blaze at the Carina Plaza apartment buildings in District 8 responsible for 13 deaths and dozens of injuries in the early morning of March 23.

An investigation into the cause of the fire found that a motorbike parked in the basement had short-circuited, sparking the flames and resulting in smoke and heat reaching as high as the 14th floor.

Most of the deceased victims died from smoke inhalation.

According to Le Huu Nghia, vice-president of HoREA, developers in many countries around the world have stopped building parking basements due to their high cost.

Instead, parking lots are located either in a separate facility or on the first two or three floors of an apartment building, making it easier for firefighters in case of an emergency, Nghia elaborated.

In Ho Chi Minh City, however, building a separate parking facility is only viable in suburban areas, where there is sufficient space, he admitted.

An expert from the city’s Urban Planning Development Association also shared a similar point of view, stating that using basements as parking lots has become outdated.

Nguyen Van Hiep, former deputy director of the municipal Department of Transport, said that it is difficult to build separate parking facilities for apartment buildings, and parking basements are still the best solution given the current land fund in the city.

The most important thing, Hiep elaborated, is a reliable fire safety system and safe operating procedures.

While underground parking lots are common in most apartment complexes across the southern metropolis, Tuoi Tre (Youth) newspaper reporters have noticed several exceptions at some apartment buildings.

At the Ehome 3 and The Bridgeview apartment complexes in Binh Tan District and District 7, both developed by Nam Long Investment Corporation, the first two floors of each block are reserved for motorbike parking while a separate parking lot for automobiles sits next to the buildings.

According to a Nam Long representative, most apartment buildings developed by the firm are designed with a similar model.

However, the developer did sacrifice some profit for opting not to build apartments on these first floors.

This approach is also applied at the Sunview Town apartment complex in Thu Duc District, developed by Dat Xanh Group.

Nguyen Dieu Que, a Sunview Town resident, believes that this design of the parking lots is convenient and helps minimize the risk of fire.