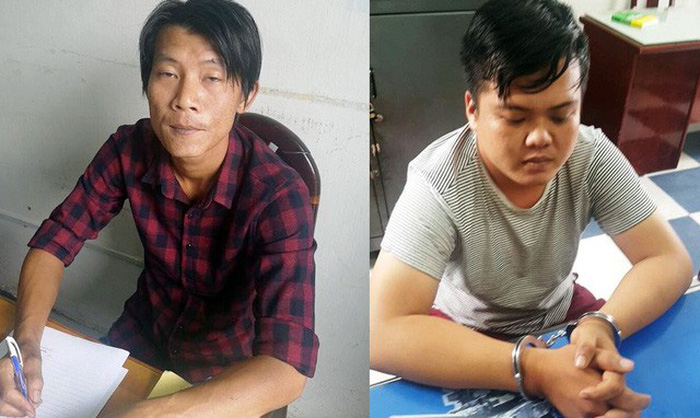 Two out of three suspects in an armed robbery on Saturday at an office of An Binh Bank (ABBank) in Ho Chi Minh City have been arrested, police say.

Nguyen Truong Khai, 35, and Dao Ngoc Nam, 28, are being held by police of Tan Phu District in Ho Chi Minh City for investigation.

Their accomplice, 31-year-old Nguyen Ngoc Khue, is still on the run.

According to Tan Phu Police, the trio had made preparations for the robbery on Friday, when they bought backpacks, coats, sneakers, gloves and a handgun to be used in the crime.

They also installed a fake license plate on a motorcycle to fool security cameras and witnesses.

At around 10:00 am on Saturday, Khai and Khue rode the motorcycle to an ABBank office on Luy Ban Bich Street, where Khai entered the bank first and threatened a security guard with his gun.

Khue entered the bank moments later, and the duo told bank employees to put all available cash into a backpack.

The security guard then managed to attract the attention of passers-by by screaming ‘robbers’ at the top of his lungs, causing a crowd of onlookers to gather outside the bank.

Worried that police officers would soon arrive at the scene, Khue and Khai ceased the crime and got away on their motorbike.

After their failed attempt, the trio replaced the fake license plate with the real one and threw away their gear to get rid of evidence.

Police were able to capture Khai and Nam on Thursday and are calling for Khue to turn himself in to authorities in order to be granted leniency during prosecution.