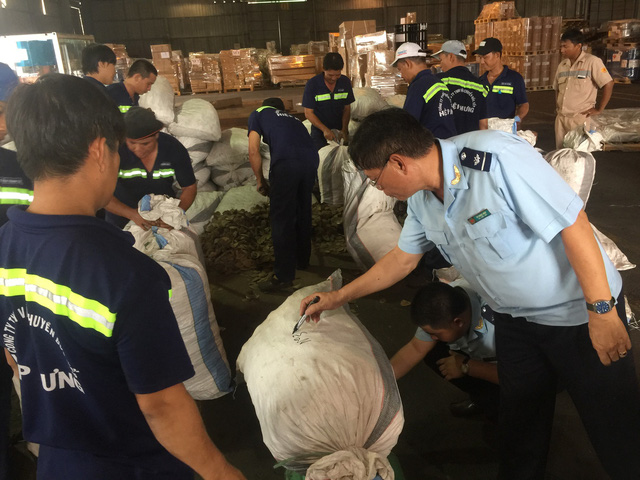 ​Tons of pangolin scales from Congo seized by Vietnamese customs

Customs officials in a port in Ho Chi Minh City on Friday seized nearly 3.8 metric tons of pangolin scales from Congo, in the biggest haul of the animal parts ever smuggled to the southern metropolis.

The pangolin scales were stored in two containers, declared as logs imported from Congo, that arrived in Cat Lai Port on Sunday.

Vietnamese authorities had received a heads-up from Congolese customs about the suspicious shipment and had been keeping a close watch on the two containers since their arrival from a transit port in Singapore, according to Dinh Ngoc Thang, deputy chief of Ho Chi Minh City customs.

Cargo scanning at Cat Lai Port following the containers’ arrival at 4:00 am on Sunday revealed suspicious empty spaces at the center of each container, surrounded by logs.

As no recipient has since come to claim the shipment, customs officials opened the containers on Friday to inspect their content and found 107 sacks containing nearly 3.8 metric tons of pangolin scales.

The scales are estimated to have been removed from thousands of pangolins, believed to be the world's most trafficked mammal accounting for as much as 20 percent of all illegal wildlife trade, according to the International Union for Conservation of Nature.

The animals are trafficked mainly for their scales, which are believed to treat a variety of health conditions in traditional Chinese medicine.

Friday’s haul is the largest ever seizure of the animal parts by Ho Chi Minh City customs, Thang said.