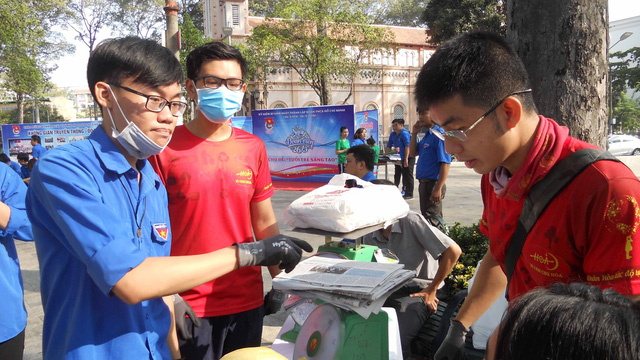 A 27-year-old Vietnamese is behind a start-up company specializing in collecting scraps to sell and raise money to help local children in need.

Throngs of teenagers poured into the company’s stall to exchange plastic bottles and old newspapers for ‘necessities,’ such as rice, milk, and cooking oil, which they are expected to donate to local impoverished residents.

This approach to doling out charitable deeds is viewed by many as a positive model to facilitate charitable giving amongst the city’s youth.

“The stall intrigues me a great deal, mostly due to the fact that I can gift the presents on my own, not via a mutual fund”, shared Khanh Thi, a young girl at the fair.

Thi received a bag of rice after donating her scrap metal to Chu Hoa stall. The young girl said she would give this small gift to an elder neighbor.

A local man also came to donate a heap of old newspapers and received three rice bags in return.

The rice will go to the lottery ticket sellers roaming about the park’s premise, he revealed.

All for the community

After graduating from college, Nguyen Van Tien knew a normal nine-to-five wasn’t for him. Instead, he opted for an occupation he could relate with where he wouldn’t be bound by time and routine – waste recycling and scrap collection.

Making full use of his past involvement in social activities, the job is a natural fit for Tien.

Chu Hoa Co. has offered to collect scrap from hotels and restaurants at more “competitive prices” than scrap collectors. “We also cleanup after collecting the scraps, something few scrap collectors do,” he explained.

This has earned the company the trust of more than 50 restaurants and hotels, Tien said.

The company is able to make up to VND 20 million (US$880) a month, with the money mostly going towards buying necessities for the needy and continuing the cycle of goodwill.

People donating scrap metal to the company receive not only necessities, but also everyday products.

“Money is not effective in this case, as it doesn’t amount to much,” he said, in explaining why the company does not pay its donators.

"Necessities, on the other hand, create more of an incentive and are very convenient.”