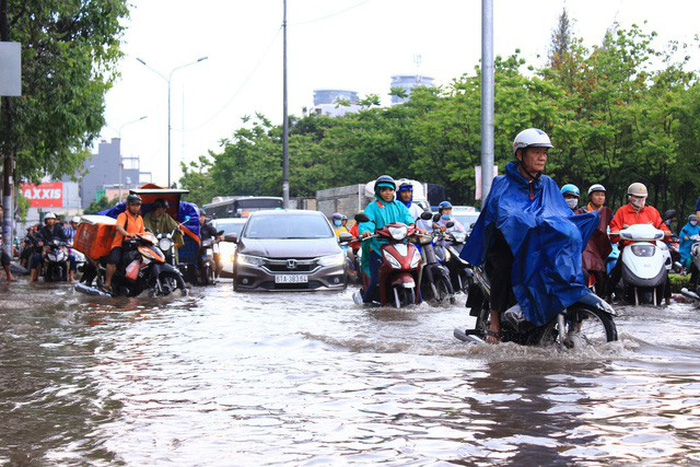 An anti-flooding pump system once again had its effectiveness questioned after failing to prevent inundation along a street in Ho Chi Minh City following a downpour on Monday afternoon.

The heavy rain caused Nguyen Huu Canh Street in Binh Thanh District, which is often susceptible to flooding due to rain and high tides, to be submerged under rainwater despite the presence of the pump.

Designed with a capacity of 27,000 to 96,000 cubic meters per hour, the machine was piloted in late 2017 and had functioned effectively on multiple occasions, most remarkably on September 21, when it took only 15 minutes to pump all floodwater, caused by high tides, on the road into the Saigon River.

However, the pump did not prove effective during the rain on October 17, and people were doubtful about its efficiency.

Nguyen Tang Cuong, general director of Quang Trung Industry JSC, which is tasked with operating the pump, later attributed the problem to excessive garbage in nearby sewers, which obstructed the flow of water.

Tran Vinh Tuyen, vice-chairman of the municipal People’s Committee, in December requested competent authorities in Binh Thanh District to regularly collect rubbish at sewer entrances along the street to optimize the operation of the pump.

On April 19, the city’s administration signed a contract with Quag Trung JSC regarding the official lease of the pump, but the exact rental fee has yet to be announced to the public.

According to vice-chairman Tuyen, if floodwater on the road is higher than 15 centimeters, the machine is considered a flop.

There has been still debate over the effectiveness of the machine and its failure on Monday appears to bring up the topic.