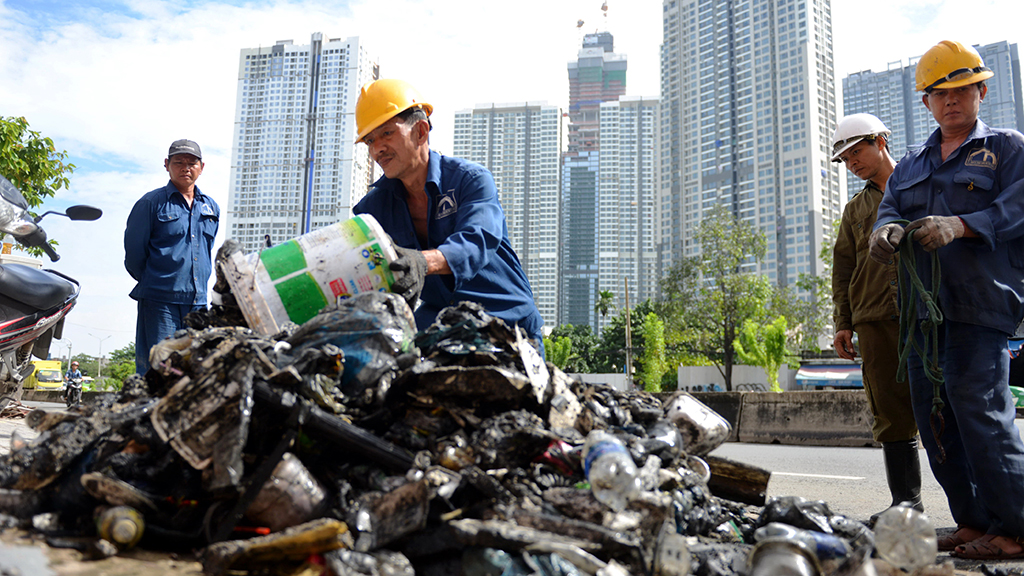 As the anti-flooding pump system in Ho Chi Minh City, which had nearly ten successful operations, was criticized for its first ‘failed mission’ earlier this week, its operator has defended that the machine only works if nearby sewers are properly dredged.

Over the past month, the anti-flood pump has been piloted on Nguyen Huu Canh Street in Binh Thanh District, a location that is often susceptible to inundation due to rain and rising tidewaters.

The system has functioned effectively on eight occasions; most remarkably on September 21, when it took only 15 minutes to pump all floodwater, caused by high tides, on the road into the Saigon River.

However, the machine was not able to deal with the serious flooding on Nguyen Huu Canh following a prolonged downpour on Tuesday.

According to Nguyen Tang Cuong, general director of Quang Trung Industry JSC, which is tasked with operating the pump, an inspection revealed that there was excessive garbage in nearby sewers, obstructing the flow of water, thus the machine was not able to alleviate flooding on the street.

A team of employees were put in charge of dredging entrances of sewers along the road, collecting nearly 19 cubic meters of rubbish.

The pump was able to suck in garbage with small sizes, less than 150 x 150 millimeters, Cuong said, adding that most of the rubbish found on Tuesday was too big for the machine to handle.

Along the 100 meter long pipeline leading to the pump, bentonite, a substance that tends to solidify when combining with water, was found, resulting in congestion.

Cuong also refuted critics that the pump system was not operated soon enough to deal with the flooding.

He asserted that it had been functioned as soon as it started raining.

The ineffective operation of the pump during the Tuesday downpour was solely attributed by congested sewers, Cuong remarked.

Meanwhile, an official from the city’s steering center of the urban flood control program, who accompanied Quang Trung’s employees during their inspection on Tuesday, stated that only plastic bags and foam boxes were found along the sewers, which could not obstruct the water flow.

He added that the presence of bentonite along the pipeline was rather unlikely.

Regarding the solution, the steering center will carry out regular dredging to help maximize the efficiency of the pump system.

The municipal People’s Committee signed a principal contract with Quang Trung for the operation of the anti-flood pump on October 2, the representative stated, adding that no evaluation on the effectiveness has been carried out.

During a meeting on Wednesday, Bui Xuan Cuong, director of the municipal Department of Transport, requested competent authorities to finalize the assessment of the pilot phase.

Reports of the pump’s operation should be regularly submitted.

He also ordered local authorities to prevent residents from dumping garbage into sewers.