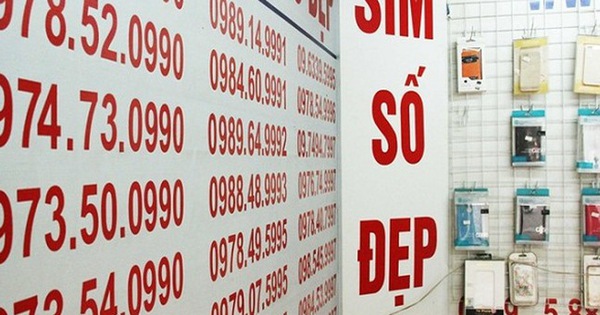 Around 60 million 11-digit mobile phone numbers in Vietnam will be replaced with ten-digit numbers starting September in a government effort to standardize the national telecommunications system.

The swap will begin on September 15 and be finished by June 30, 2019, according to a plan by the Vietnamese Ministry of Information and Communications.

Owners of 11-digit mobile phone numbers are not required to take any action, as the entire process will be carried out by providers of their respective networks.

The last seven digits of each number will remain the same, as only the first four digits will be swapped for a shorter combination of three digits unique to each network operator.

Current ten-digit numbers will not be affected by the change.

Eleven-digit phone numbers were first rolled out in Vietnam in 2007, but they have never become popular with mobile users due to the fact that most SIM cards of this format were disposable prepaid cards used by advertisers to send SMS spam.

According to mobile operators, owners of 10-digit numbers are also less likely to switch between networks than those who have 11-digit numbers.

From September 15 until November 14, 2018, callers who dial 11-digit phone numbers will be automatically re-directed to their 10-digit equivalents.

After the date, a voice message will be played when someone attempts to reach 11-digit phone numbers, informing them of the change and giving instructions on how to dial the new numbers.

In June 2017, Vietnam rolled out new telephone area codes for 23 municipalities and provinces across the country, which freed up around 500 million combinations of ten-digit phone numbers for mobile use, according to the information and communications ministry.

After this upcoming extensive change, all phone numbers in Vietnam will have ten digits, allowing for better management.

As of February 2018, there were around 119.5 million active mobile phone numbers in Vietnam, according to statistics provided by the Vietnam National Telecommunications Agency.

News of the swap has left millions of mobile owners in Vietnam worried, as a range of services registered with phone numbers would be affected, including emails, e-wallets, social media and mobile banking accounts.

Mobile users affected by the swap are advised to inform their banks of their new numbers, as banks are not legally allowed to update customers’ phone numbers without their written consent.