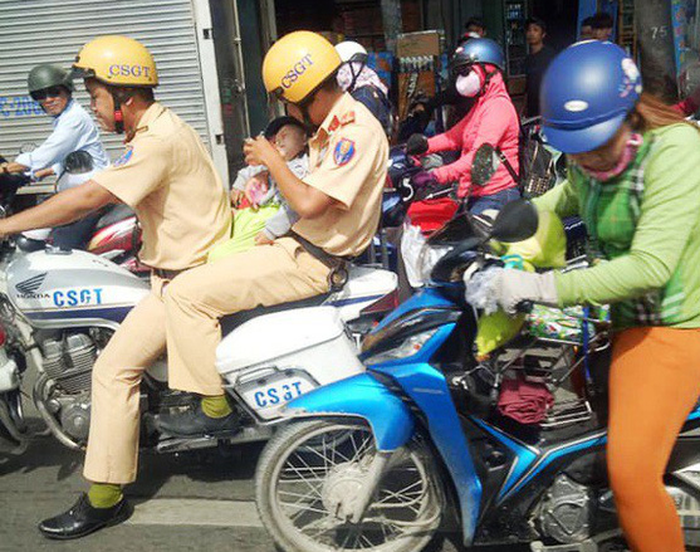 Two police officers in Ho Chi Minh City have been widely commended on social media for taking a baby to the hospital on a congested street.

Vu Dinh Nam and Doan Tan Phu were directing traffic at an intersection in the metropolis on Monday morning when a woman cried for help, officer Nam recalled.

“Save my baby, please!” the woman pleaded.

Having looked at the child’s pale complexion, Nam and Phu first showed her where an infirmary was but later decided to lead the way, with the mother riding behind amidst heavy traffic.

“Now can we carry the baby to the hospital first?” Nam asked her while stopping on a street with a tie-up, and she agreed.

The officers said that they had intended not to switch on the siren but had to ride in the wrong direction with the device wailing to rapidly arrive at the destination, which the woman reached a while later.

When the baby had been brought to the hospital, the policemen returned to the original place and resumed their duty.

In a hurry, the policemen forgot to ask for the names of the baby and mother.

“At the time, our mind was occupied with taking the baby to the hospital. We didn’t think of anything else,” Nam recounted.

“The baby looked very pale and was dropping off, and maybe suffering from intense heat.”

Nam rode the motorcycle while Phu was keeping the child in his arms and close to his chest, and holding a feeding bottle.

The scene was captured by a passer-by with Facebook account Quang Chanh in a viral photo that was liked more than 65,000 times and shared over 2,500 times.

Comments included ‘So warm,’ ‘You’re really friendly,’ and ‘So loveable.’