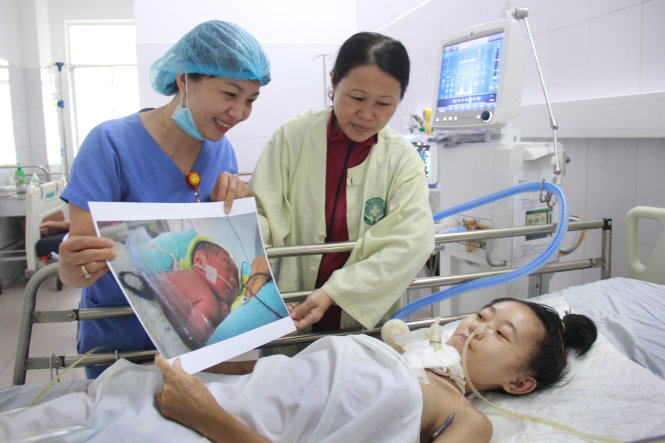 A critically ill woman in central Vietnam has defied all the odds stacked against her, including death, to give birth to a child she was willing to save even at the cost of her own life.

“The delivery went smoothly. It’s a girl,” a nurse announced as she exited the labor room at Da Nang General Hospital past 9:00 pm on Monday, to the relief of those anxiously waiting outside.

It was an outcome none had thought would be possible given the condition of the 25-year-old mother Le Thi Tu Cam prior to childbirth.

Cam is diagnosed with a rare neuromuscular disorder that causes a loss of motor neurons and progressive muscle wasting, leading to early death in most cases.

Since her admission to the Da Nang hospital seven months ago, Tu has twice been declared clinically dead by doctors due to cessation of vital signs, but the young woman fought on each time to stay alive for the sake of her unborn daughter.

“On those two occasions, we not only tried to resuscitate her using medical intervention but also told her: ‘Don’t give up, Cam. You still have your child to live for’,” said  Pham Ngoc Lan, director of Da Nang General Hospital.

“It was as if she could hear us and that was what brought her back to life,” he added.

There were times when Cam’s condition worsened to the point when she weighed merely 25 kilograms, couldn’t speak and had to rely on life support and intravenous feeding to sustain her life.

During those times, doctors gave her the painful advice of aborting her child to save her own, which she unfailingly refused.

“I’ll be happy to die, but not until I’ve lived to see the birth of my child,” she said.

Despite damages to her throat muscles that makes it almost impossible for Cam to ingest food through her mouth, she insisted on resuming eating normally prior to delivery after finding out that her unborn child weighed only less than one kilogram.

Doctors were amazed that she could still swallow liquid food, after all muscles on her body were thought to have been wasted due to the disorder.

By the time Cam entered labor, she had gained ten kilograms thanks to her new diet.

Her daughter, whom she names Ky Tich, a Vietnamese word meaning ‘Miracle’, weighed 1.9 kilograms at birth and is in a stable condition despite being kept under intensive care for further monitoring.

Cam hasn’t had the chance to see her daughter in the flesh since delivery as the baby is being cared for by doctors at another hospital in Da Nang specializing in pediatrics.

“You still have a whole life ahead to dedicate to your child, so the important thing now is for both of you to get stronger,” Ha Son Binh, a doctor at Da Nang General Hospital, told Cam as she asked for her daughter after waking up from the operation.

“I hope the child would be a motivation for Cam to stay strong in the battle against her disease,” Binh said.

“Who knows, there might be another miracle in her life.”