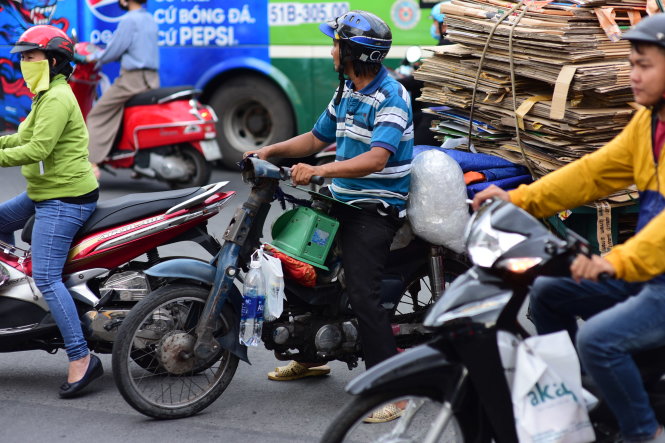 The transport department of Ho Chi Minh City has proposed a scheme to regulate emissions from motorcycles in an effort to combat worsening pollution caused by outdated two-wheelers.

The VND2.4 billion (US$103,000) scheme looks to begin regulating motorcycle emissions from 2018, with two-wheeled vehicles boasting engine cylinders of 175 cubic centimeters or more in volume being the first to fall under mandatory inspection.

Motorcycles that have been in use for more than five years and are being used for commuting in special-class, first-class or second-class cities must seek undergo emission inspection to be certified for roadworthiness, according to the proposed scheme.

Total inspection fees, including issuance of emission certificates and inspection stickers, are VND60,000 ($2.5) per vehicle a year.

There are around 20,000 vehicles falling under the scope of inspection in the first phase in five Vietnamese municipals – Hanoi, Ho Chi Minh City, Da Nang, Can Tho and Hai Phong, according to the transport department of Ho Chi Minh City.

In the second phase, which starts from 2020, motorcycles with engine cylinders of less than 175cm3 in volume will also be subject to emission inspection.

The municipal transport department will also launch campaigns to recall outdated motorcycles and encourage a switch to electric scooters for less environmental impact.

It is working with Vietnam Register, a state body responsible for technical supervision and quality certification of means of transport in Vietnam, to introduce suitable emission standards for motorcycles.

Two model inspection stations will be built in Hanoi and Ho Chi Minh City during the first phase, providing two rounds of free inspection for thousands of motorcycles in these metropolises.

According to the municipal transport department, vehicles are responsible for 70-90 percent of air pollution in the city, while industrial and household activities are only responsible for 10-30 percent.

Ho Chi Minh City’s 7.6 million-strong motorcycles, as of July 2018, make up 95 percent of all vehicles on citywide roads, constituting half of the southern metropolis’ petrol consumption, according to statistics provided by the transport department.

Motorcycles emit 94 percent of hydrocarbon (HC), 87 percent of carbon monoxide (CO), 57 percent of nitrogen oxide (NOx), and 33 percent of fine particles having diameter of 10µm or less (PM10) of the city’s total emissions from vehicles.