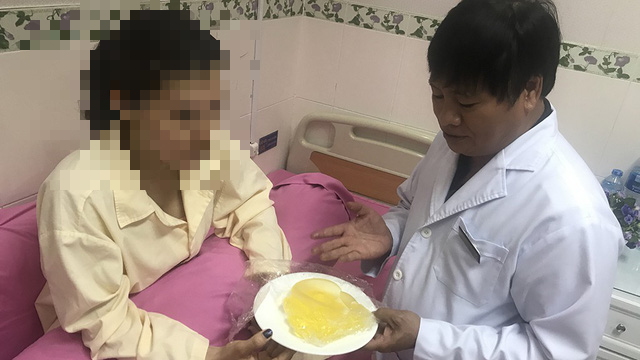 A female Vietnamese singer who is receiving treatment for her ruptured silicone breast implant believes that the incident happened when she was on board a flight from Taiwan to Vietnam last week.

M.T.V. recalled hearing a strange sound of something bursting during the October 22 flight but she did not think much about it, until she noticed her painful and swollen breast while taking a shower when she arrived home.

An ultrasound at the Gia Dinh People’s Hospital later showed that her silicone breast implant could have exploded, the singer told local media on Monday.

Doctors at the Ho Chi Minh City-based hospital advised that V. contact the person who had previously carried out her breast augmentation.

But it turned out that the surgeon, known only as Dr. L., had shut down his clinic in Binh Thanh District, where V. got the implants seven years ago, to return to his hometown to treat his cancer, according to the singer.

This renders the lifetime warranty certificate for her Eurosilicone implants useless, V. added.

She decided to seek treatment at the Hiep Loi Beauty Hospital in District 8.

“I have never heard about breast implant rupture due to aircraft pressure,” said Phan Hiep Loi, general director of the beauty hospital.

“It would not have happened if the silicone was of high quality.”

It might be just a coincidence, Loi continued, adding that a surgery was promptly carried out to remove the busted implant and prevent serious complications.

Complications of breast augmentation surgery may arise from many factors, namely surgeons’ skills, quality of the implants, and postoperative care, the doctor elaborated.