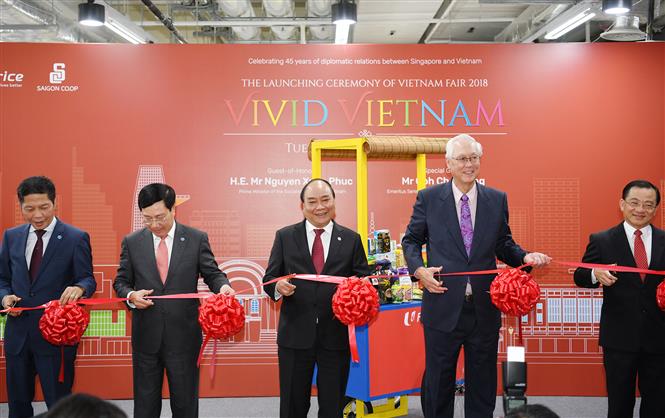 -- Russian Prime Minister Dmitry Medvedev will pay an official visit to Vietnam on November 18-19 at the invitation of his Vietnamese counterpart Nguyen Xuan Phuc, Vietnam’s foreign ministry announced on Tuesday.

-- Cambodian Deputy Prime Minister and Foreign Minister Prak Shokhonn on Tuesday affirmed that his country will work to support the Vietnamese-Cambodian community in Tonle Sap Lake to resettle as he met with his Vietnamese counterpart Pham Binh Minh on the sidelines of the 33rd ASEAN Summit and related meetings in Singapore.

-- Ho Chi Minh City chairman Nguyen Thanh Phong will hold his third meeting with residents in the Thu Thiem area in District 2 on Wednesday morning to update them on the latest results of inspections launched into the relocation of locals for an urban area project.

- Harmful algae blooms have appeared at unusually high levels at the Van Phong Bay in the south-central province of Khanh Hoa, killing fish and causing damage to aquaculture farms in the area.

-- Prosecutors in the Mekong Delta province of Tien Giang have launched legal proceedings against seven Vietnamese accused of making VND240 million (US$10,300) worth of counterfeit money and selling it for profit.

-- Vietnamese Prime Minister Nguyen Xuan Phuc on Tuesday attended the opening ceremony for the Vietnamese Goods Week in Singapore, which aims to promote hundreds of Vietnam-made agro-fishery products and commodities to Singaporean consumers, as part of his trip to the Southeast Asian neighbor to attend the 33rd ASEAN Summit and related meetings.

-- Mobile users in Vietnam will have to pay no more than VND60,000 ($2.60) and wait less than an hour to have their phone number ported from one carrier to another after the launch of mobile number portability (MNP) in the country this Friday, according to the latest announcements.

-- Car buyers in Vietnam are decrying “unreasonable” registration fees that they are made to pay to own the vehicles, as the fees are calculated according to the highest price ever paid for a vehicle of the same model rather than the price they actually paid for it.

-- Overseas remittances to Ho Chi Minh City totaled $3.8 billion in the first ten months of 2018, a slight increase of six percent from the same period in 2017, and are expected to top $5 billion by the end of this year, according to the State Bank of Vietnam in the city.

-- A12-year-old student in Ho Chi Minh City has died after suffering from a stroke while at school on Monday, a rare case of stroke in children reported in Vietnam as doctors warn of extreme health risks associated with the condition.