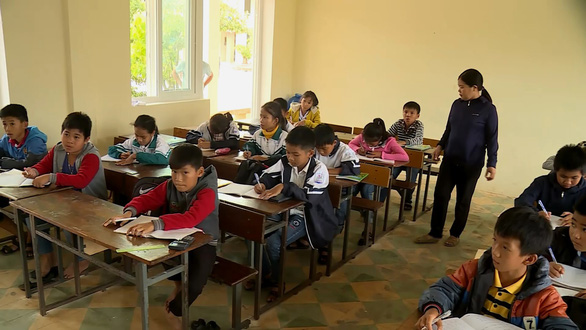 Police in the north-central province of Quang Binh on Monday launched legal proceedings against a case of a local middle school teacher asking classmates of a student to slap him 230 times for “swearing” in class.

A sixth grader at Duy Ninh Middle School in Quang Binh was hospitalized last week after he was repeatedly slapped in the face by his classmates as a punishment from his teacher for allegedly using foul language in class.

The math teacher, Nguyen Thi Phuong Thuy, asked the whole class to give the student ten slaps each after he was accused of “swearing” by another classmate.

In total, the boy suffered 230 slaps to his face, with the 231st coming from Thuy herself after he responded to the punishment by saying “I hate you, teacher”.

Thuy has been suspended from work pending disciplinary action from her school.

The boy was discharged from the hospital with soft-tissue injuries including swollen cheeks and difficulty chewing and opening his mouth.

His family said Thuy had visited and apologized to the student after the incident.

As per the school regulations, any class whose students are found swearing will lose ‘five points’ in the internal awards system, so Thuy must have acted under pressure, according to the headmistress of Duy Ninh Middle School.

The headmistress has asked for the family’s sympathy over the teacher’s “inappropriate way of handling the situation”.

According to her students, Thuy had set the rules for the bizarre punishment from the start of the school year and made it clear that whoever violated school regulations would be slapped by their classmates.

Before last week’s incident, other students had also fallen victim to the harsh punishment but none had suffered from as many slaps as the boy did.

Still, Thuy insisted that her punishment is “a way of deterring bad behaviors.”

“I’m aware that my method is flawed, but it was due to pressure from the grading system,” she said on Sunday.