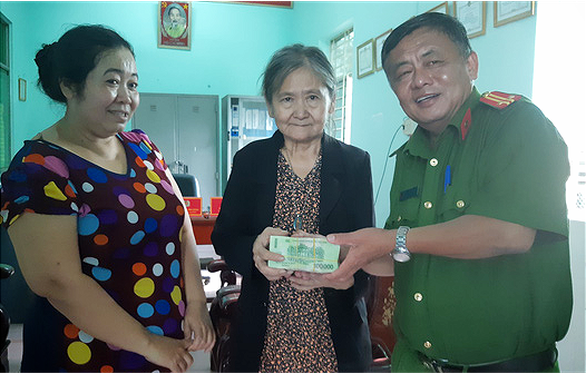 A Vietnamese woman in the southern province of Dong Nai has returned a lost bag to local police after she prevented a stranger on the street from picking up the item, which contained a huge amount of cash.

Police in Bien Hoa, the capital city of Dong Nai, said on Wednesday they received the bag from Thach Thi Tha, who tried to get the lost item back to its real owner from another woman who attempted to take it away.

The incident took place earlier the same day, when an elderly woman named La Luu Hi left a bank in Bien Hoa with VND100 million (US$4,300) worth of cash stored inside a plastic bag.

The woman then traveled to the house of her creditor to pay back her debt, with the bag hung on the side of her motorbike.

During her travel, Hi noticed the bag dropped off her motorbike and even saw a woman pick it up, but the elder woman failed to follow her to get it back.

What Hi did not know is that Tha witnessed everything and managed to stop the unidentified woman in the act, as she was trying to hide the bag under her shirt.

When Tha said the item was hers, it was given to her.

Tha took the bag to a local police station and a little while later Hi, the owner, also arrived to report her case.

Police made ownership verification before returning the money to Hi.

Officials said Tha left her hometown in Vietnam’s Mekong Delta for livelihood in Bien Hoa and has been living in the city for two decades.

She has taken care of an abandoned child with heart condition for nearly five years on a voluntary basis and usually offers help at a pagoda – an action which she believes yields future benefits in her life.

“I live in a rented accommodation and try to do good deeds toward others,” Tha said.

“When I see someone lose something, I just think I am losing it. I feel anxious and sad.”

The woman was no stranger to Hi.

“I was astonished to see Tha at the station. I often visit the pagoda and meet her there,” Hi said.

“She is very kind-hearted.”