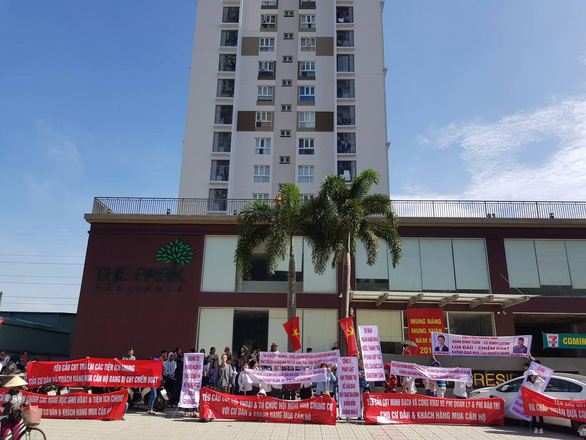 Multiple residents of an apartment block in Ho Chi Minh City congregated along a street on Saturday in a protest against its developer who has failed to deliver on facilities promises although they have lived there for nearly two years.

Over 100 dwellers at the Park Residence in the metropolis’ suburban district of Nha Be held banners accusing its corporate developer, Phu Hoang Anh, of scam and misappropriation of their money.

The owners said the company sold flats and has allowed them to live in the places for more than one year although it has failed to complete facilities such as a fire system, safety fence, stadium, swimming pool and building for communal activities.

The apartment owners said they had a strong wish to meet the developer during the period but the company remained quite elusive.

“We’re now living in fears of our own safety,” a participant at the event said.

The district administration came to the site on the same day and promised to hold a meeting between the residents and developer on December 18.

Local administrators said they had tried to reach the company in vain after receving a petition from the dwellers calling for pressure on the developer.