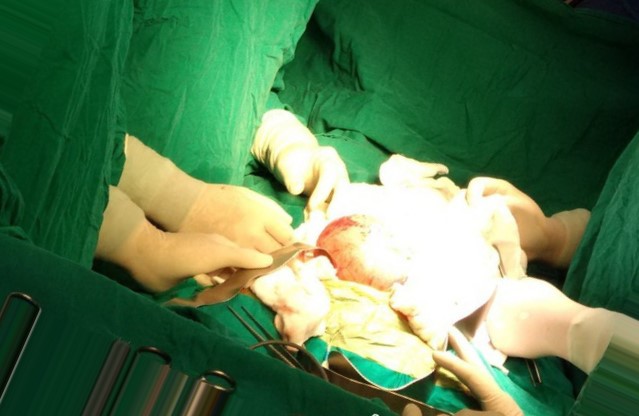 Doctors in Ho Chi Minh City said Tuesday they had excised a group fetus-like tissues that caused a young child’s abdomen to grow unusually in size.

After a medical scan, the four-year-old boy named T.T.P. was found to have a mass of tissue, a spine, skull and ribs develop inside him.

The mass, around 12 centimeters in diameter and 1.5 kilograms in weight, occupied more than half of the right part of his abdomen, according to Nguyen Tran Viet Tanh, a doctor at the Pediatrics Hospital 2, where the child was operated.

It was linked to his kidneys and an aterty in the pelvis while impeding the flow of urine in a tube from the urine to bladder, Tanh said.

The boy suffered from a very rare congenital anomaly known as fetus in fetu, said Vu Truong Nhan – deputy head of a department at the infirmary.

Fetus in fetu is a less-known phenomenon that has had around 200 cased reported so far worldwide and admitted two explanatory theories.

One says the mass is a normal fetus that forms inside its twin while the other supposes it is a highly develooped type of tumor, having the tissue of bone, muscle and hair.

Nhan advises women three months into pregnancy to avoid exposure to dangerous chemicals and radioactive substances and only use medince prescribed by doctors even when it is a herbal remedy.