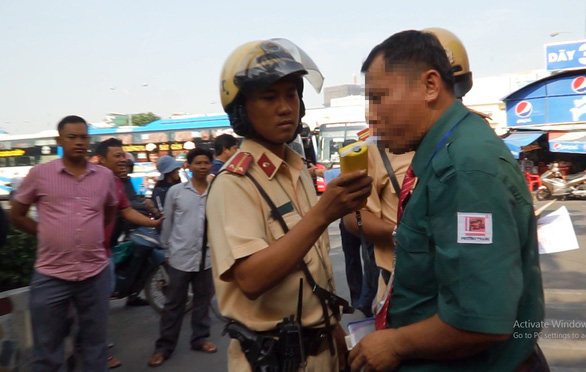 Police test drivers for drug, alcohol use at major bus station in Saigon

Traffic police officers in Ho Chi Minh City on the weekend extended their ongoing inspection to one of the city’s busiest bus stations, focusing on examining possible drug and alcohol consumption among passenger bus drivers.

The municipal traffic police division arrived at the Mien Dong (Eastern) Bus Station in Binh Thanh District on Sunday and performed drug and alcohol tests on a group of randomly selected drivers.

The drivers were tested prior to their journeys.

L.D.Q., 53, a driver hailing from the central city of Da Nang, had his license confiscated after his test result showed him exceeding the breath alcohol limit.

The police unit also impounded Q.’s passenger bus and contacted his employer to further deal with the case. Police did not disclose which long-haul route Q. drives on.

Another team of officers were in charge of asking random drivers at the same bus station who had suspicious signs to undergo a clinical urine test to check whether they had used drugs.

None of them, however, tested positive for narcotics as of 2:00 pm of the same day.

“The inspection will continue until the end of the Lunar New Year [Tet] holiday,” a police official stated, referring to the national holiday that begins on February 2 and lasts for nine days.

Sunday’s tests were conducted as part of the second phase of a month-long inspection aimed at tackling driving under the influence of drugs and alcohol and ensuring traffic safety, which takes place from January 15 to February 15.

The first phase lasted from January 15 to 22, during which officers examined drivers along major routes at the city’s entrances from 6:00 pm to 2:00 am on a daily basis.

Approximately 31,500 passengers arrived at the venue on Sunday, and the number is expected to increase as Tet approaches.