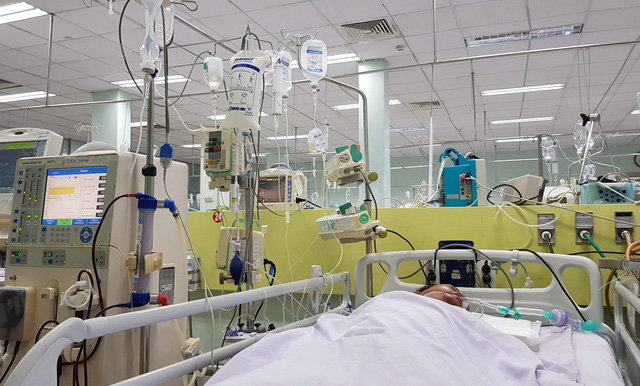 Man's life in jeopardy over methanol poisoning in Vietnam

A Vietnamese man who was in a critical condition after consuming alcohol mixed with industrial methanol now has a bad prognosis as doctors in Ho Chi Minh City feed pure ethanol into the patient’s digestive system to delay methanol breakdown, while he is undergoing dialysis.

D.V.M., a resident in Ho Chi Minh City, was admitted to the 115 General Hospital in District 10 in the early hours of Wednesday with symptoms of methanol poisoning.

He went to work as usual the next morning, but began to feel sick on Tuesday evening, with symptoms including fatigue, difficulty breathing and profuse vomiting.

M. was rushed to the 115 General Hospital early Wednesday, where doctors diagnosed him with methanol poisoning, allegedly from consuming alcohol that had been mixed with industrial methanol.

At the time of his admission, M. was unconscious and in a critical condition, suffering from respiratory distress and low blood pressure.

The pH level in his blood was dangerously low, coupled with damage to the liver and kidneys that could threaten the patient’s life, doctors said.

Tests showed the concentration of methanol in his blood was 54.1 milligrams per deciliter 36 hours after consumption of the alcohol, way over the deadly threshold of 40 mg/dl.

Pure ethanol of 96-percent concentration was administered to the patient’s stomach to help delay the body’s natural breakdown of methanol, a process that releases harmful toxins, while he underwent dialysis to remove the methanol from his digestive system.

However, the patient’s condition has not seen much improvement, as doctors say prognosis is bad.

Earlier this month, doctors at a hospital in north-central Vietnam took a similar approach to treating a patient suffering from methanol poisoning with successful results.

Doctors in Quang Tri Province fed the patient 15 cans of beer, containing around four percent of ethanol each, as they performed dialysis on him.

Methanol poisoning is a persistent issue in Vietnam, where alcohol sold on the market can come from unlicensed establishments that mix methanol with the drink for higher profits.

Over 2,700 people suffered from methanol poisoning in the country, and ten died, in the first ten months of 2018, according to the Food Safety Department under the Ministry of Health.