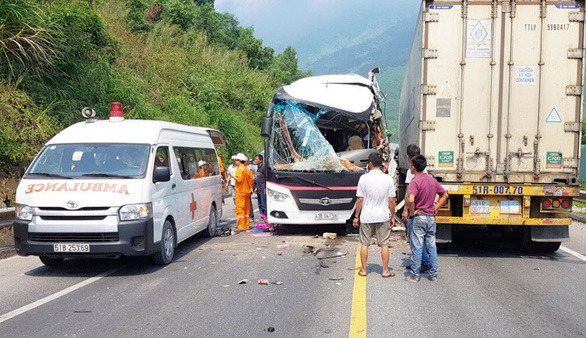 Many South Korean holidaymakers were injured after their tourist bus collided with a trailer truck at the entrance of the Hai Van Tunnel in central Vietnam on Monday afternoon.

The accident happened at around 12:10 pm along the road leading to the Hai Van Tunnel, a more convenient and shorter alternative to the Hai Van Pass, which lies at the border of Da Nang City and Thua Thien-Hue Province.

The tourist bus was traveling from Thua Thien-Hue to Da Nang when it crashed into the truck running in the opposite direction.

Initial information showed that 11 people on the bus were injured, most of whom are South Korean visitors.

Both vehicles were damaged following the collision.

The injured were brought to the hospital for emergency treatment, as police arrived at the scene for investigation.

Traffic along the route was back to normal at around 1:30 pm the same day.

The number of accidents along the Hai Van Tunnel has recently increased due to the rising volume of traffic.

Monday’s incident came less than a month after a tourist bus crashed into the fence and overturned inside the tunnel in late January, injuring five people.

More than 10,000 vehicles travel through this route on a daily basis, according to data released late last year.

This volume of traffic is nearly three times the average daily number of vehicles in 2005, when the structure was put into operation.