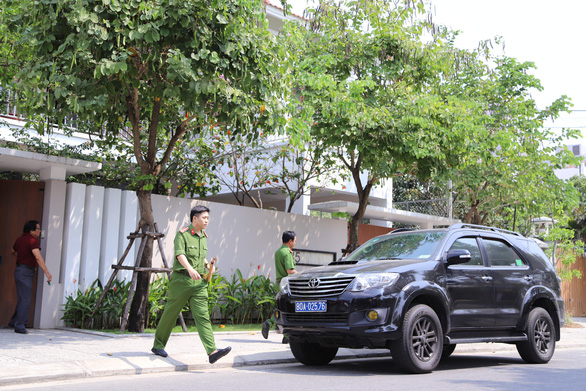 Among those prosecuted is Nguyen Ngoc Tuan, 61, former deputy chairman of the Da Nang administration, who is investigated for violating regulations on the “management and use of public capital” and “land management”.

Two corporate leaders, Le Anh Tuan, chairman of the board of directors of the Da Nang Ship Chandler Corporation, and Phan Minh Cuong, former director of the I.V.C Limited Company and general director of the 79 Construction Joint Stock Company, were prosecuted for the same charge.

All of the accused had their house searched in accordance with court warrants.

Cuong was put into temporary detention for the investigation, while the remaining six were barred from leaving their place of residence.

The former Da Nang officials and business leaders are being probed in an expanded investigation into the crimes of Phan Van Anh Vu, a.k.a. Vu ‘nhom’, a local business tycoon who acquired many of the central city’s prime real estates via unorthodox methods.

In January, Vu was sentenced by a court in Hanoi to 15 years in jail for “abusing position and power while performing duties”.

Vu, 44, is a former Senior Lieutenant Colonel and deputy head of an intelligence division at the Fifth General Department of the Ministry of Public Security.

According to his indictment, while running the Bac Nam 79 Construction and Nova Bac Nam 79 Companies, Vu abused his power as a Ministry of Public Security intelligence officer to ask authorities to rent land to him or give him land use rights for multiple prime locations in Da Nang and Ho Chi Minh City, which was not in line with state regulations.

He then made the land plots his own properties or those of his relatives’, transferred them, or put them under shared ownership with other people to earn illegal profits, the court ruled.

Under the first-instance judgement, Vu, with the highest role in the case, was found responsible for a loss of over VND135 billion (US$5.81 million) to state assets.

Fourteen ex-officials in Da Nang, including the five prosecuted this week, have so far been put under criminal investigation for links to Vu’s illegal activities.