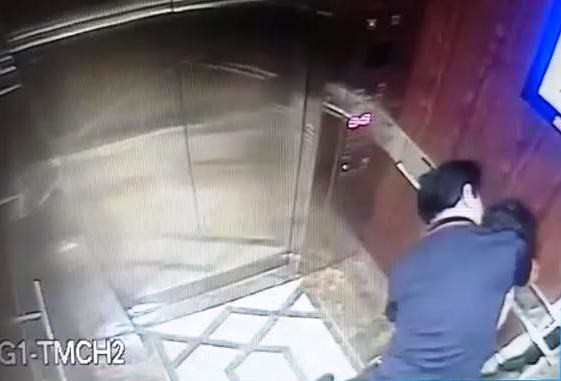 Police in Ho Chi Minh City are investigating a case where a man allegedly molested a little girl inside an elevator of a local apartment building.

The incident happened at the Galaxy 9 Apartment Complex in District 4 at around 9:10 pm on Monday.

The man was identified as Nguyen Huu Linh, 61, who resides in Hai Chau District in the central city of Da Nang.

The alleged sexual harassment was caught on CCTV installed inside an elevator of the apartment building, with the footage going viral on social media on Tuesday, before officers were aware of the case.

According to the video, the young girl first walked into the lift, followed by Linh, who was wearing a blue shirt and holding a smartphone.

A security guard then helped the girl select her floor before exiting the lift.

As soon as the door closed, Linh approached the kid, laid his arm around her neck, and kissed her.

As he stopped, the girl walked away from him toward the door. Linh grabbed her once again and only let her go when the door opened.

The child, who was apparently terrified, ran out as fast as she could.

According to Colonel Nguyen Sy Quang, chief of staff of the Ho Chi Minh City police department, Linh was visiting a family member living inside the apartment building that day.

He has already returned to his home in Da Nang, Col Quang added.

Officers have asked Linh to come to the southern metropolis again to assist the investigation. If he fails to cooperate, police will take him by force.

Tran Ngoc Nu, a Ho Chi Minh City-based lawyer, told VnExpress online newspaper that the man’s action can be considered as molesting an under 16-year-old person, which is punishable by six months to three years in prison in accordance with the Vietnamese law.

In early March, a man was caught on camera forcefully hugging and kissing a 20-year-old girl inside an elevator at an apartment building in Hanoi.

He was required to make a public apology to the victim but failed to do so.

The man was eventually slapped with a VND200,000 (US$8.6) fine for “having offensive words and actions toward another person.”