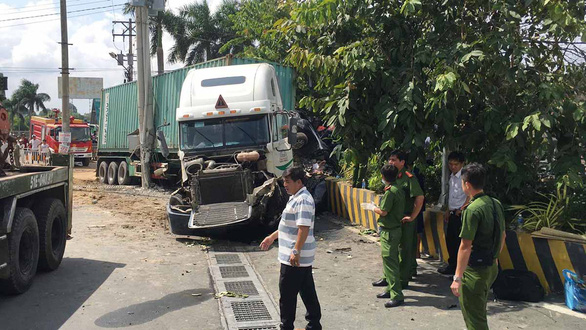 -- The seventh session of the 14th National Assembly (NA) wrapped up in Hanoi on Friday, completing all items on its 20-day working agenda.

-- A tractor trailer crashed a car heading to Ho Chi Minh City on a section of National Highway 22 passing through Trang Bang District, in the southern province of Tay Ninh at about 6:00 am on Friday, killing the driver and all four passengers on board.

-- Mien Dong (Eastern) Bus Station in Ho Chi Minh City’s Binh Thanh District has sought to reduce congestion in front of its entrances by equipping buses with digital parking cards that allow them to pass the gates without stopping the vehicles.

-- A two-day court in the Mekong Delta City of Can Tho on Friday imposed a 20-year imprisonment sentence to Tran Anh Huy, former director of a local branch of Vietcombank, for violating regulations in the provision of loans.

-- Police of the northern province of Lao Cai have arrested three men, who attempted to illegally transport 16 bricks of heroin to China. They are members of an inter-provincial and trans-national drug trafficking ring from Laos to China, with two connecting points in Vietnam - the Central Highlands province of Dak Lak and Lao Cai.

-- Several household eateries located along a section of National Highway 1 passing through the two districts of Le Thuy and Quang Ninh in the north-central province of Quang Binh have complained that a ban on trucks and passenger buses through the section have affected their businesses with a significant drop of customers.

-- The third European Art of Living Exhibition - EuroSphere 2019 which gathers over 50 European age-old brands in the fields of food and beverage, fashion, jewelry, cosmetics, perfume, furniture, cars, education, real estate and tourism, is taking place in Ho Chi Minh City from June 14 to 16.

-- A series of cultural activities to boost summer tourism, including an international women’s beach volleyball open tour, a coracle paddling race, a cuisine competition and a photo and painting exhibition, is taking place on the pristine beach of Ha Thanh Village of Tam Ky City’s Tam Thanh commune, in the central province of Quang Nam, from June 14-18.

-- Vietnam jumped to the 96th place on the FIFA Rankings, their highest rank in 20 years, according to the latest updates by the football governing body on Friday.