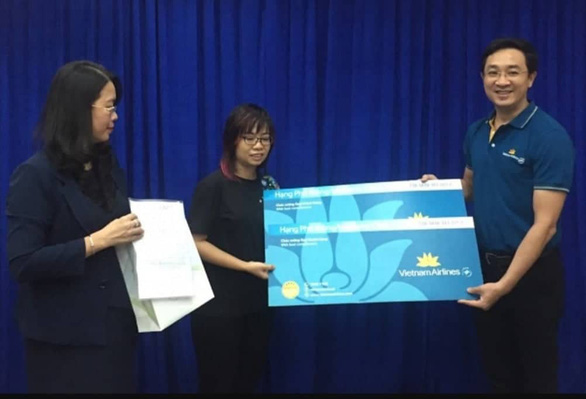 The Ho Chi Minh City Department of Tourism has presented a Japanese visitor with a return flight ticket as a token of apology after he was overcharged by a local cycle rickshaw driver last weekend.

The tourism department on Wednesday handed the gift to Oki Toshiyuki, an 83-year-old tourist from Japan, who was previously asked to pay VND2.9 million (US$124) for a short cyclo ride in Ho Chi Minh City’s downtown area on Saturday morning.

The present, which was a two-way ticket for a flight operated by national carrier Vietnam Airlines, was given to Toshiyuki’s family member in Ho Chi Minh City as he had already returned to Japan.

This is a sincere apology for such an unfortunate incident, Nguyen Thi Anh Hoa, deputy director of the municipal Department of Tourism, stated, hoping that Toshiyuki will make a return visit to Vietnam in the future.

The official called on citizens to join hands to ensure a friendly and safe tourist environment for all visitors to Ho Chi Minh City.

According to Le Thuc Anh, Toshiyuki’s daughter-in-law, the man has already forgiven the cyclo driver and promised to return to Vietnam in the near future.

On the morning of August 3, Pham Van Dung, a 49-year-old resident in District 4, carried Toshiyuki on his cycle rickshaw from Ben Thanh Market to Liberty Central Saigon Riverside Hotel in District 1.

After reaching the destination, the foreign passenger decided to pay him VND500,000 (US$21.5) to express his gratitude for the two-kilometer journey, but the driver said it was not enough.

Dung was summoned by police on Tuesday and admitted to his wrongdoing.