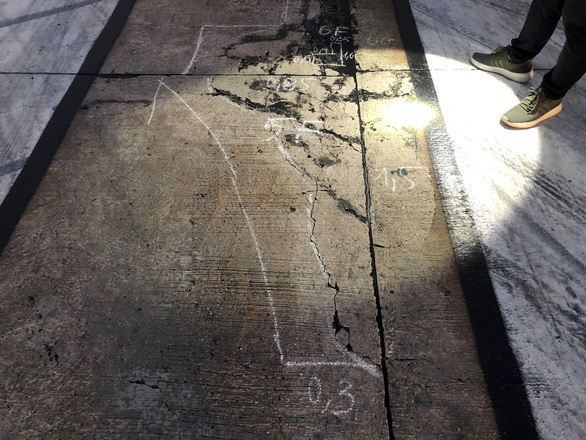 Flights to and from Noi Bai International Airport are facing safety risks due to the degradation of runways and taxiways there, the Civil Aviation Authority of Vietnam (CAAV) has warned, as it sought government approval for a special mechanism to resolve the issue.

Two runways at the Hanoi-based airport have cracks and deformations, and one of them has two tire marks, measuring one meter wide each, CAAV said in a report sent to the Ministry of Transport.

Taxiways connecting these runways have also been deteriorating, according to the document.

The document was meant to call on the transport ministry to seek approval from Prime Minister Nguyen Xuan Phuc for repairs to degraded and cracked runways and taxiways at Noi Bai.

According to CAAV deputy head Pham Van Hao, the degradation of the airport infrastructure increases commensurately with the frequency of flights at the airdrome.

“The two runways and some taxiways have been in use for a long time, and the flight frequency at the airport has been rising steadily, which only worsens the deterioration,” Hao told Tuoi Tre (Youth) newspaper.

While repairing the runways and taxiways is an urgent task, work has yet to start because of a tardy approval process.

The transport ministry, which is responsible for repairs and maintenance of runways and taxiways at all 21 airports throughout Vietnam, reportedly lacks funds to carry out the work, while the Airports Corporation of Vietnam (ACV), which wants to use its money to do the job, is not allowed to do so by law.

Therefore, the management of Noi Bai International Airport can only do temporary fixing to the damaged infrastructure.

However, as the temporary repairs will not be effective in the long-term, thus posing risks for flight operation at the airport, the CAAV has urged the Ministry of Transport to seek permission from Prime Minister Nguyen Xuan Phuc for ACV to use its own money to carry out a thorough repair job.

Work should be done soon as the runways and taxiways may become so damaged that they could no longer be in service, according to the aviation watchdog.