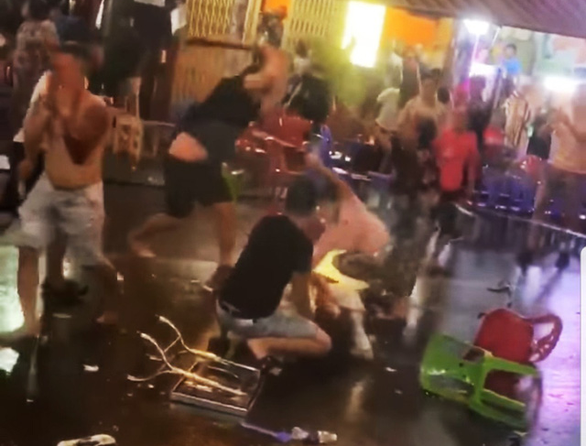 Police in Ho Chi Minh City have arrested ten people who were involved in a street brawl that took place in the city’s ‘backpacker area’ last week.

The police unit in District 1 confirmed on Thursday they had apprehended the men and women who participated in the physical confrontation along Bui Vien Street in Pham Ngu Lao Ward on the night of August 30.

The violence broke out between two groups, one of which included six customers of the beer shop at 75 Bui Vien Street, while the other included four employees of the beer parlor at 73 Bui Vien, which is situated next door.

Nine out of the arrestees were charged for disturbing public order. The other, 44-year-old Nguyen Thi Giau, who was among the group of employees, was charged for assault.

At the police station, Giau admitted to attacking one person in the opposing group with a machete.

According to preliminary information, the street brawl occurred at around 11:30 pm that day, stating with an argument, which quickly escalated into violence, over the seats of the two beer parlors.

Beer shops on Bui Vien Street become very crowded on Friday nights and weekends, thus employees of these venues often place tables and chairs on the sidewalks and occupy the roadways.

A video of the incident also went viral on social media.

In the clip, which is less than a minute long, many men and women were seen attacking one another with tables, chairs, and wooden batons. Many of them appeared to be drunk.

They made a huge scene along Bui Vien Street, a major route within the city’s ‘backpacker area.’

Officers in Pham Ngu Lao Ward later arrived at the location to examine the scene and collect statements from eyewitnesses.