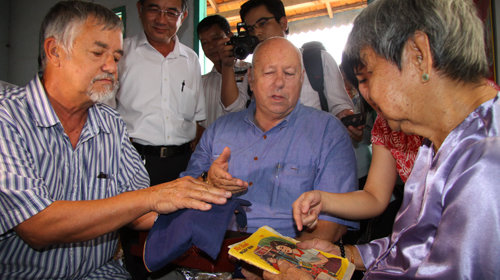 A group of Australian veterans on Tuesday handed over to Vietnam a database expected to help locate the remains of thousands of Vietnamese soldiers who have remained missing since the American war in Vietnam ended in 1975.

A digitized battlefield map of the former province of Phuoc Tuy, which today makes up most of Ba Ria-Vung Tau Province in southern Vietnam as well as the Truong Sa (Spratly) archipelago, was presented to a visiting Vietnamese delegation to Canberra.

About 3,800 Vietnamese soldiers are believed to have been buried in the area during wartime, the possible burial sites of whom are featured in the digitized battlefield map.

The database is the fruit of a decade-long research by a team led by Dr. Bob Hall, a military historian at the University of New South Wales who is also a veteran in the American war in Vietnam.

It is part of their project coined 'Operation Wandering Souls – Bring Them Home,' which is hoped to locate the burial sites of fallen Vietnamese soldiers from both sides of the battlefield.

Maj. Gen. Tran Quoc Dung, head of the Policy Department under the General Department of Politics of the People’s Army of Vietnam, said at a ceremony receiving the database in Canberra on Tuesday that the project greatly contributed to the Vietnam-Australia relations, which included the bilateral defense ties.

With the support of the Vietnamese side, six Australian military personnel who were missing in action after the war have been repatriated to their home country, Dung said.

A total of 200,000 Vietnamese soldiers of both front lines, who have remained missing since the war ended in 1975, are believed to have been buried in forests or battlefields across southern Vietnam, Laos and Cambodia, Vietnam News Agency reports.

The data was then visually transformed into detailed battlefield maps, publicly accessible at https://vietnam.unsw.adfa.edu.au/battlemap/, which also include the likely burial sites of fallen soldiers in the war in multiple Vietnamese localities.

Australians were involved in more than 6,000 combat incidents during the American war in Vietnam, ABC News reported.

"We are not looking for the graves ourselves … we are telling them where they are located," Derrill de Heer, who co-led the research, was quoted by ABC News as saying.

In July, Vietnam inaugurated a modern DNA testing center in Hanoi capable of testing up to 4,000 samples of remains of unknown soldiers each year, which is expected to help speed up the identification of fallen soldiers buried at battlefields throughout the country.

He said he wanted to return to Vietnam to teach local authorities how to use the mapping tools in their ongoing search for war dead - something that he hopes will help "bring more wandering souls to rest."