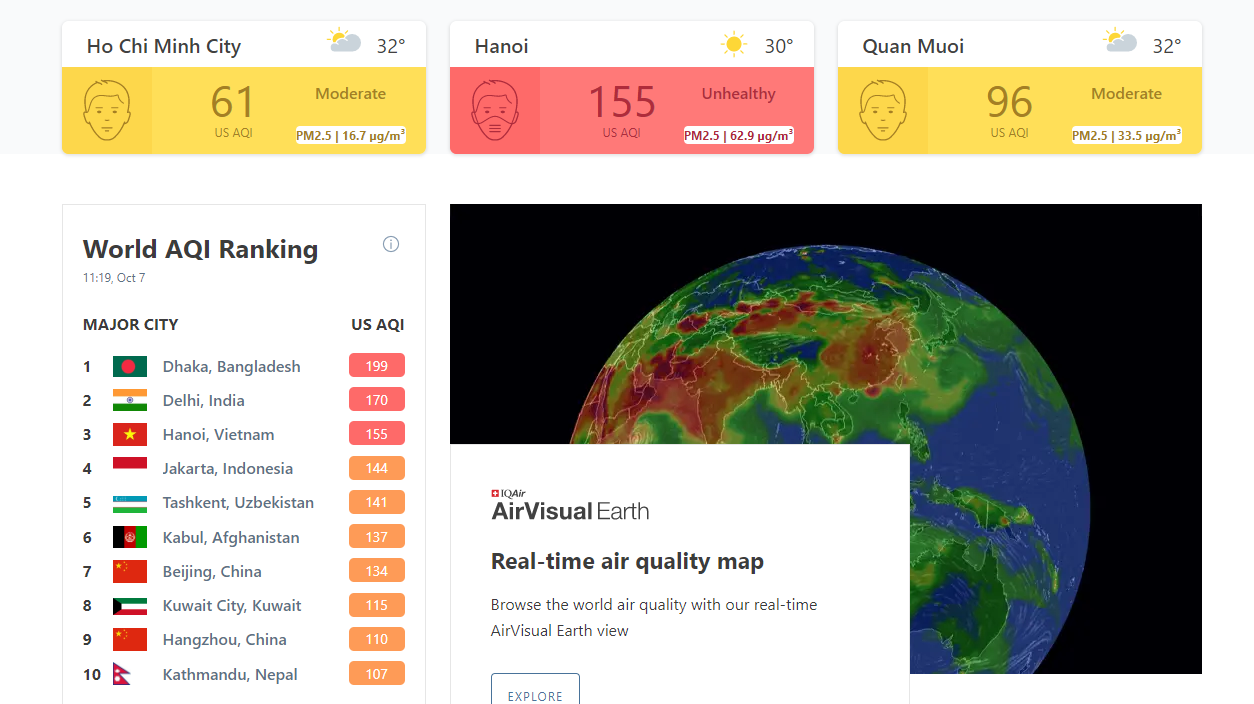 Smartphone users in Vietnam have not been able to search for air quality tracking app AirVisual on the App Store and Play Store since Sunday evening, while air pollution continues to choke residents in Vietnam’s largest cities.

AirVisual is a website and mobile app that tracks air quality in cities around the world using input data from on-site monitors as well as satellites and remote sensors.

It gives pollution ratings in the form of an air quality index (AQI), which considers up to six main pollutants - PM2.5, PM10, carbon monoxide, sulfur dioxide, nitrogen dioxide and ground level ozone - and translates them into an “easy-to-understand scale” to clearly represent the health risk posed by ambient air pollution, according to AirVisual.

The index ranges from 0 to 500, where high index values indicate higher levels of air pollution and higher potential for adverse health effects.

AirVisual’s data have been frequently cited by Vietnamese news outlets in recent weeks as air quality in Hanoi and Ho Chi Minh City - Vietnam’s two largest cities - has been on a serious decline since September.

However, since Sunday evening smartphone users in Vietnam have not been able to search for the AirVisual app on both their iOS and Android devices.

The official Facebook page of AirVisual has been inaccessible from Vietnam as of Monday morning.

The page could still be accessed through a virtual private network (VPN) connection from a different country, according to Dang Tran Tuan Trung, a resident in Ho Chi Minh City.

The app appears to function normally on devices that already have it installed.

AQI ratings for Hanoi and Ho Chi Minh City also briefly “disappeared” from the AirVisual app and website for a few hours on Sunday evening.

The number of tracking nodes referenced by AirVisual in Hanoi has been reduced from 14 to one after the brief outage. The app’s only source for air quality readings in the Vietnamese capital is now the Hanoi Environmental Monitoring Portal.

In the week before its mysterious “disappearance,” AirVisual was the second most downloaded app on the App Store in Vietnam, and the 41st most popular app on the Play Store in the country.

As of 10:30 am on Monday, Hanoi scored an “unhealthy” AQI of 155 and a PM2.5 level of 62.9 micrograms per cubic meter, the third most polluted city worldwide, according to AirVisual. These parameters were 78 and 25, respectively, for Ho Chi Minh City.

The Vietnamese capital was at times in September the city with the highest AQI in the world, surpassing the likes of Beijing and Bangkok.

However, AirVisual has said this “does not mean that Hanoi is the world’s no. 1 polluted city.”

“At any one time, a city can top the live ranking, as happened with London and even San Francisco last year,” AirVisual said in a statement published on its website on Sunday.

The air quality tracking site said it also publishes a separate annual world ranking in partnership with Greenpeace, and that a report published in March showed that “Hanoi was not in the world’s top 200 most polluted cities in 2018.”

“On our platform, we are transparent about where we get our data from and how we publish it,” it said.