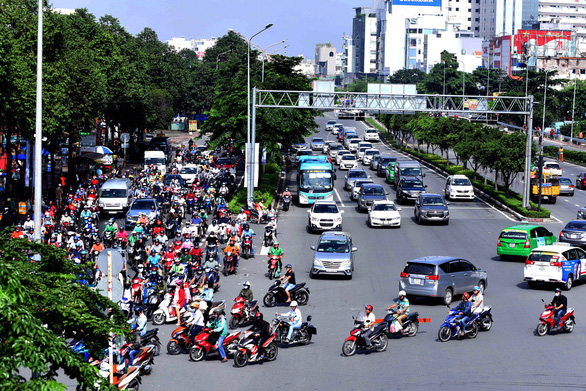 Read what is in the news today, October 7!

-- Members of the People’s Council of Ho Chi Minh City voted unanimously on Sunday to greenlight policies on paying compensation for an additional 331 households in a 4.3-hectare land area in Thu Thiem, which was cleared for construction of the Thu Thiem New Urban Area.

-- Venerable Thich Thanh Toan, a Buddhist monk who is the abbot of the Nga Hoang Pagoda in Vinh Phuc Province of northern Vietnam, has asked to be defrocked after he was accused of flirting with a female reporter.

-- Residents are told to brace for worsened traffic congestion on the 3.2-kilometer Nguyen Huu Canh Street that connects District 1 and Binh Thanh District in Ho Chi Minh City as works have begun on repairing and upgrading the road to combat land subsidence and inundation.

-- A small earthquake of magnitude 3.3 was recorded in the northern province of Dien Bien at 11:34 am on Sunday and lasted for around 2-3 seconds. It was the tenth earthquake to hit Dien Bien in 2019.

-- Vietnam’s fledgling carrier Bamboo Airways will launch daily flights linking major cities of Vietnam with Seoul, the capital city of South Korea, starting October 17, and a direct air route connecting the capitals of Vietnam and the Czech Republic in the first quarter of 2020, according to a representative of the airline.

-- Vietnam and Indonesia are leading Southeast Asia in terms of Internet economy growth, with growth rates of more than 40 percent, while Singapore, Malaysia, Thailand, and the Philippines registered a 20-30 percent expansion, according to a recent report by Google, Temasek and Bain & Company.

-- More than 80 percent of credit institutions in Vietnam expect better business performance for the fourth quarter as well as the whole of 2019, according to a recent survey by the State Bank of Vietnam. Nearly 30 percent of these institutions predict “great improvement” in the months to come.

-- The Vietnam Youth Federation on Sunday launched the “I Love My Motherland” journey in the northern province of Phu Tho to celebrate its 63rd anniversary. The journey will take place in all cities and provinces nationwide with a wide range of activities such as learning about historical and cultural relic sites, and hosting youth forums and art exchanges.