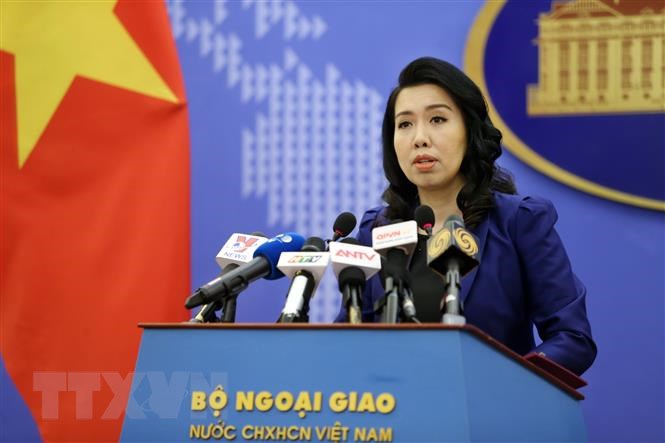 After British police announced on late Friday that all victims found dead in a truck container in Essex on October 23 are believed to be Vietnamese, the Vietnamese foreign ministry’s spokesperson Le Thi Thu Hang said on Saturday that this is “a great humanitarian tragedy.”

“We are deeply saddened and offer our deepest sympathy to the families of the victims over the huge loss," Hang said in a statement sent to the media.

She informed that immediately after the case came to light on October 23, the foreign ministry had instructed its Consular Department and the Vietnam Embassy in the UK to coordinate with relevant agencies and localities of Vietnam and the UK, provide information related to the case from Vietnam to assist with the identification of victims, and open hotlines to receive information and get citizen protection measures ready in the case there are Vietnamese among the victims.

“The embassy had also transferred the results of UK police’s identification process to Vietnamese agencies for cross-check,” Hang said.

At present, the Ministry of Public Security of Vietnam and British police are coordinating in identifying victims suspected to be Vietnamese citizens in order to announce the victims’ identities at an early date, she added.

“Vietnam strongly condemns human trafficking activities, which is a serious crime that needs to be strictly punished,” the spokesperson said, calling on countries in the region and the world to intensify cooperation to prevent and combat human trafficking, thus preventing the recurrence of similar tragedies.

The spokesperson also expressed thanks and appreciation to the government, agencies and localities of the UK for their investigation, information provision and close coordination with Vietnamese agencies in the case.

“We hope the British side would soon complete the investigation and strictly punish those who are responsible for the tragedy,” she said.

On Friday, British police said they believe all victims found dead in a truck container in Essex, about 32 kilometers from central London, on October 23 are Vietnamese.

The police added that they have identified some of the victims and have contacted the Vietnamese Government and some families in the UK and Vietnam.

Vietnamese Ambassador to the UK Tran Ngoc An has said despite being mentally prepared for the worst possible possibilities, he is “shocked and deeply saddened” when officially informed by the UK police, according to the Vietnam News Agency.