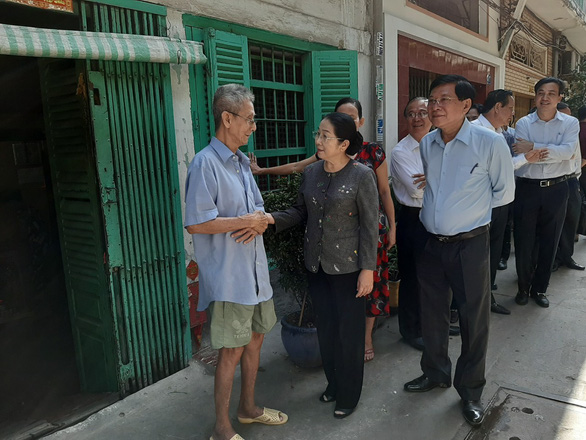 Residents of a tenement in Ho Chi Minh City have rejected a relocation request by local authorities, insisting on discussing compensation and resettlement with investors before they move elsewhere.

It is urgent that those living in the tenement at 43 Binh Tay in District 6 be relocated as it has badly run down, relevant agencies said, citing their own inspections.

But local residents have maintained that it is still safe to live there, defying the inspections.

They have insisted on discussing compensation and resettlement plans with any developer that wants to rebuild the tenement before any relocation, District 6 officials said.

A site inspection, led by Vo Thi Dung, deputy secretary of the Ho Chi Minh City Party Committee, on Wednesday showed that the flats were leaking while their wall coating was falling off.

Some of the sections along the common balcony exposed the steel core.

The stair handrails cracked whereas parts of the exterior coating had come off, baring the inner bricks.

Some households even added an extra floor to their flats.

The municipal Department of Construction and the District 6 People’s Committee are required to conduct a re-assessment of the tenement before taking any further measure, Dung ordered.

The tenement at 43 Binh Tay has 48 flats, two of which are owned by the state, covering over 1,600 square meters in total.

The residents say generations of their families have lived here for more than 80 years.