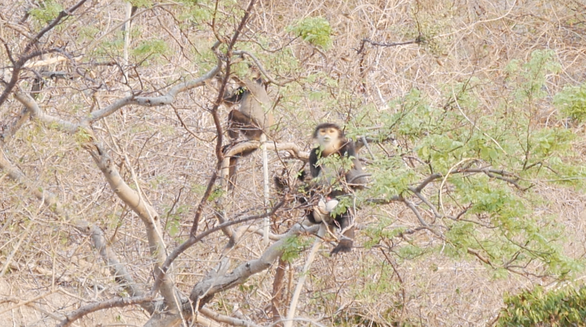 In search of food and water amid the prolonged drought in Vietnam’s south-central region, hundreds of endangered black-shanked douc langurs have made their way to coastal protection forests in Ninh Thuan Province over the past few days.

“Perhaps the lack of food and water in the uplands due to the ongoing drought prompted the black-shanked douc langurs to migrate down to the suburban areas,” Hieu told Tuoi Tre (Youth) newspaper.

Duong Tu Giang, head of Thuan Nam District’s forest protection authority, said his unit has acknowledged the rare occurrence and will cooperate with the management board of coastal protection forests in the district to monitor and keep track of the langur tribe’s quantity and movement for conservation work.

The authority will also warn people not to hunt for the langurs, Giang said.

They traditionally inhabit forested areas south of the Truong Son mountains in Vietnam and the adjacent Cambodian mountains.

A historic drought has affected the central, south-central, Central Highlands, and Mekong Delta regions of Vietnam since February.

In Ninh Thuan, residents have reported little to no rain for more than a year.