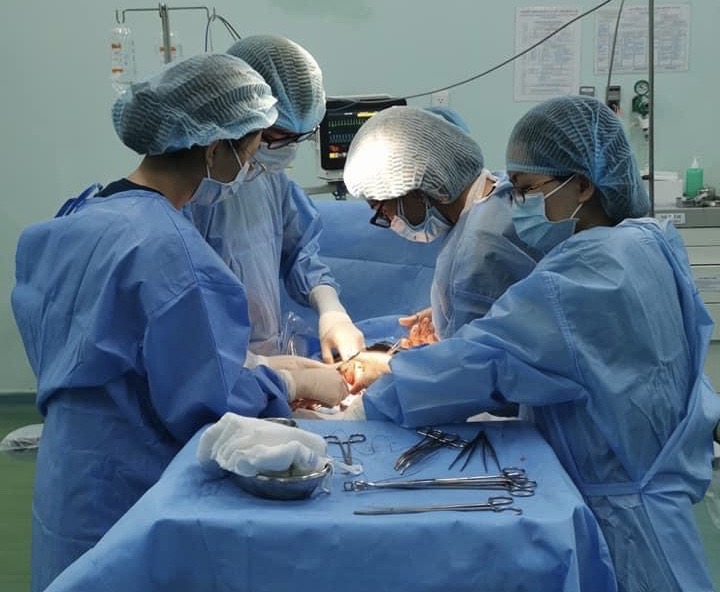 Doctors in Ho Chi Minh City have managed to save a fetus wrapped around by six rounds of umbilical cord – a critical situation that can lead to no heartbeat.

The 2.1-kilogram baby, the first child of 30-year-old P.V.A.T., came out alive thanks to a successful surgery that was conducted at Hung Vuong Hospital in District 5 at 5:30 pm on Friday.

Six rounds of umbilical cord wrapped around the baby's body, including two around his neck, two along his back, and two around his belly, when his mother was hospitalized in her 29th week of pregnancy on April 3.

The tightening cord throttled the blood flow through the fetus, resulting in his severe malnutrition, yet not to the point of fatality.

For seven weeks, the pregnant woman was placed under tight monitoring and received intensive care in the obstetrics ward, as well as regular consultancy from the unit for diabetes at the hospital.

Hospital doctors were able to prolong the woman’s pregnancy for more than one month and a half with well-controlled vital signs.

They even improved her pregnancy status and the fetus’ chance of survival.

Doctors at Hung Vuong Hospital said they had met a number of cases where a fetus had a nuchal cord.

However, never had they seen such a complicated case with the umbilical cord becoming tightened around the fetus at two other positions than his neck.

The doctors described it as a miracle that the mother safely delivered the baby with six rounds of umbilical cord around his body, as he could have lost his heartbeat at any time, regardless of how closely he was monitored.